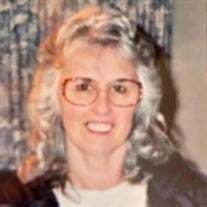 Mary Jane (Watkinson) Holt entered this life on March 8, 1945 in Garnett, Kansas to Thomas “Blair” & Dorothy (Proctor) Watkinson. She was welcomed into heaven on Thursday, January 20, 2022 at the age of 76 years. Mary was born and raised on a farm in Garnett, Kansas with her two sisters and three brothers. Her mother, Dorothy, passed away when she was only two years old. Her father then married Wanda, and together, raised Mary and her siblings. She married Burke Holt on December 17, 1964 and they made their first home in San Diego, CA, but soon returned to the Midwest. Togetherness became their middle name – right up to the time of his passing last year. These two lived their vows “for better or worse” during their 57 years of marriage. Mary professed her faith in Christ on June 4, 1976, in the Reorganized Church of Jesus Christ of Latter-Day Saints. She has been an active, faithful servant throughout her life and she and her husband enjoyed working with the youth and spent several years as Church youth leaders. Mary was a devoted pastor’s wife for many years, and she had been attending the Springfield Restoration Church until her health declined. Mary’s church families over the years, have held a special place in her heart. Mary always exhibited a “hard work ethic”. Through the years, Mary was employed at Keys, in Hermitage, MO; Teeters in Bolivar, MO; and completed 28 years of service at Hamboula, LLC in Kansas City, MO before retiring in 2012. After learning of her passing, her co-workers only had the kindest things to say when it came to their friend. Things such as, “That Mary was such a dedicated worker and will be sorely missed,” or “She was such a kind person and so well-loved by all who knew her.” Upon retirement, Mary & Burke moved back to the Preston area to be closer to family. “Mama Bear” was a fond nick name the boys called their Mom because raising twin boys was not an easy task. What one wouldn’t think of the other did! She was known as the family peacemaker, with her endless patience. Mary was slow to anger, usually pleasant, and quite often took up for them in most situations. So the boys sometimes referred to her as the “Mediator” and their Dad the “Enforcer”. Mary was an excellent cook! Her biscuits and gravy and potato salad were always requested on camping trips and holidays. She took much pride and immense enjoyment from her love of plants, flowers, and birds. She loved sitting outside on her deck as an avid bird watcher! The hummingbirds and cardinals were her favorites. She always made sure the feeders were never empty, especially in the winter! Mary also never lacked compassion for her feathered and furry friends. The love that Mary had for all little ones was very evident when you saw the obvious joy on her face when they were around. Especially her own grandchildren and great-grandchildren. They never failed to bring a smile! We celebrate Mary and the wonderful, loving, Mom, Grandma, sister and aunt she was. So as we say goodbye to her, we truly know we have lost a sweet loved one. Even though she may be gone from our sight she is not gone from our minds. Yes, each of us will miss her warm smile, her kind way, her quiet humility, and her gentle nature that was evident in her daily life; but we can carry these intangible memories we shared with her in our hearts until we meet again. We know without a doubt that she is in a far better place! We celebrate her life and know that she will be fondly remembered by her family, friends, and all those whose lives she touched throughout the years. Mary was preceded in death by her husband, Burke Holt; her parents, Thomas “Blair” & Dorothy Watkinson; stepmother, Wanda Watkinson; two brothers, Warren and Thomas “Tommy” Watkinson; and one sister, Linda Meisner. She leaves to celebrate her memory and continue her legacy; two sons, Tommy Dale Holt & wife Taria, of Preston, Missouri and Johnny Dale Holt of Preston, Missouri; five grandchildren, Devin Holt & wife Natalie of Bolivar, Missouri, Shane Holt & wife Kylie of Jacksonville, Florida, Brennan Holt & fiancée Kaylie DaMitz of Preston, Missouri, Jeramy Holt & wife Lisset of Camdenton, Missouri, and Derrick Holt of Springfield, Missouri; seven great-grandchildren. Hayden, Everly, Camille, Nora, Celeste, Gaia, and Sky; one sister, Debbie Beachner & husband Steve of Kansas City, Missouri; one brother, Doug Watkinson & wife Rita of Rydal, Georgia; several nieces and nephews; and other relatives and countless friends. A Celebration of Life Memorial Service will be announced at a later date. Cremation Rites are being accorded by the Cantlon-Otterness and Viets Funeral Home in Buffalo, Missouri. To send flowers or a memorial gift to the family of Mary Jane Holt please visit our Sympathy Store.

The family of Mary Jane Holt (Buffalo) created this Life Tributes page to make it easy to share your memories.