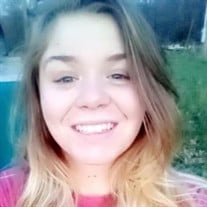 Megan Bailey Nicole Glasser, daughter of Martin and Nicola Wilson Glasser, was born November 12, 2000, in Lake of the Ozarks, Missouri. She departed this life Saturday, April 16, 2022, in her home, near Stoutland, Missouri, at the age of twenty-one years, five months, and four days. She was preceded in death by her maternal grandfathers, Johnny Wilson, and Leon Jones; and her paternal grandparents, John and Joyce Glasser. Megan is survived by a son, Ryanlynn Glasser, of the home; her father, Martin Glasser, of Hollis, Oklahoma; her mother, Nicola Freeman, and her husband, Ebbin, of Lebanon, Missouri; two brothers, Matthew Glasser, of Licking, Missouri and Nicholas Freeman, of Windyville, Missouri; four sisters, Haley Glasser, Hallie Glasser, Ebbiney Freeman, all of Windyville, Missouri, and Alley Glasser, of Lebanon, Missouri; her maternal grandmother, Diana Jones, of Lebanon, Missouri; as well as a host of other relatives and friends. She was raised in the Lebanon area and lived most of her life in Laclede County. She graduated from Lebanon High School in the Class of 2019. She had been employed by Emerson Electric for the last two months and was a devoted homemaker to her son. Megan did volunteer work at the Free Store, loved books and was an avid reader. She also liked playing softball. Her greatest joy was taking care of and loving her son. Megan was a loving mother, daughter, granddaughter, sister, and was a caring friend. We celebrate her life and know that her family and friends will hold tight to the wonderful memories she made with them during her short lifetime. A memorial has been established and contributions may be made through the funeral home.

Megan Bailey Nicole Glasser, daughter of Martin and Nicola Wilson Glasser, was born November 12, 2000, in Lake of the Ozarks, Missouri. She departed this life Saturday, April 16, 2022, in her home, near Stoutland, Missouri, at the age... View Obituary & Service Information

The family of Megan Bailey Nicole Glasser (Lebanon) created this Life Tributes page to make it easy to share your memories.

Send flowers to the Glasser family.