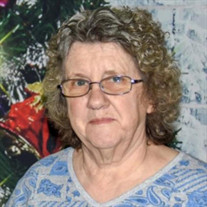 Melba Jean Kincheloe, daughter, of Fernon and Violet Reid Caudle, was born September 5, 1946, in Lebanon, Missouri. She departed this life Saturday, November 20, 2021, in Providence Medical Center, in Kansas City, Kansas, at the age of seventy-five years, two months, and fifteen days. On February 17, 1964, she was united in marriage to John Lee Kincheloe and to this union one daughter and one son were born. She was preceded in death by her parents; and a brother, Danny Caudle. Melba is survived by her husband of fifty-seven years, John, of the home; a daughter, Beverly Kincheloe, of Kansas City, Kansas; a son, Jimmy Kincheloe, and his wife, Shannon, of Lansing, Kansas; five grandchildren, Heather, Josh, Trey, Trevor, and T. J.; two great-grandsons, Elvin and Xavier; three brothers; two sisters; several nieces and nephews; as well as a host of other relatives and friends. She was born and raised in Lebanon and graduated from Lebanon High School. After she and John were married, they moved to Kansas City, Kansas. She began working for the Safeway Bakery where she continued to be employed for ten years. Later, she worked at Unilever for twenty years, before retiring. She was a hard worker and received several safety awards through the years. She never had to repeat herself, put up with an ornery husband, but enjoyed harassing him in return. She liked camping and taking fishing trips and enjoyed vacationing by herself when she needed it. She greatly enjoyed watching her grandchildren play soccer, cheerleading and whatever activities they might be involved. She also was an avid reader. Her family was very dear to her and she especially enjoyed her grandchildren and great-grandchildren. Melba was a loving wife, mother, grandmother, great-grandmother, and was a caring friend. We celebrate her life and know that her family and friends will hold tight to the wonderful memories she made for them during her seventy-five years. Funeral services for Mrs. Kincheloe will be Monday, Nov. 29 at 10 a.m. at Holman-Howe Funeral Home in Lebanon. A visitation will be held from 9 a.m. - 10 a.m. in the funeral home. Burial will be in Crossroads Cemetery. Arrangements are under the direction of Holman-Howe Funeral Home.

The family of Melba J. Kincheloe (Lebanon) created this Life Tributes page to make it easy to share your memories.