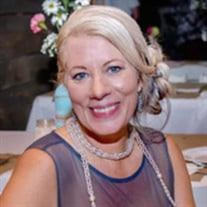 Melissa Ruth (Wilkerson) Trader was born to Robert and Mary “Ruth” Wilkerson in Macks Creek, Missouri on August 16, 1968. On January 31, 2022 Melissa was reunited with her husband in Heaven. Melissa, known as Missy by those in her youth, grew up and spent her entire childhood in Urbana, Missouri on the family farm. She attended Skyline School District where she was a cheerleader, in the marching band including first chair for clarinet, and was also a member of the chess club where she won several tournaments. She was elected President of the Skyline FFA during her senior year and was presented the State Farmer Degree. Anything that Melissa did, she did wholeheartedly and excelled at. Melissa was a dear friend to all that knew her. She kept many good friendships from childhood throughout her adult life. She was saved as a young child and dedicated her life to God. Later, when Melissa was in her 30’s she was baptized at the First Christian Church of Buffalo, Missouri. Melissa met Max Trader during his leave from the military. They fell in love and two years later they were married on June 4, 1988. They were blessed with two children, Douglas Thomas and Jacqueline Elizabeth. Melissa and Max lived a happy life together and were the best example to their children of what true love should be. They were inseparable for all their 32 years of marriage, until the Lord called Max home on January 19, 2020. Melissa was a dedicated employee and worked for a few local banks, Moore Veterinary Clinic, Harris Real Estate, Ash Grove Aggregates, and lastly Ozarks Technical Community College (OTC) where she served for 15 years. Her last position at OTC was a Veteran & Military Certifying Officer which gave her satisfaction in helping the community. She always had a soft spot for our service men and women. Being able to help each and every one of the individuals filled her with so much pride. Melissa obtained two Associates degrees through OTC, and was finishing her Bachelor’s degree in Science. Melissa loved being with her family any time that she could. Family was an important part of her life. She was incredibly proud of both of her children and talked about them when given the opportunity. Melissa was blessed to also have three amazing grandchildren, Daylen, Kaylee, and Natalie. She enjoyed going to the kid’s ball games, recitals held at their schools, and having sleepovers at “Gromma’s House” as they would say. She also enjoyed every moment that she was able to spend with her newest granddaughter Natalie. Melissa was proceeded in death by her husband, Max Trader, and her father Robert Wilkerson. She was survived by her son Douglas Trader and wife, Elizabeth and their daughter Natalie of Springfield, Missouri; daughter Jacqueline (Trader) Courtney and husband, James and children Daylen and Kaylee of Sparta, Missouri; her mother, Mary Ruth (Linton) Wilkerson of Urbana, Missouri; her brothers, Benton Wilkerson and wife, Juli of Hermitage, Missouri; and Matthew Wilkerson and wife, Donna of Urbana, Missouri; as well as many numerous nieces, nephews, cousins, and multitudes of friends. Funeral services for Melissa will be 11:00 am Tuesday, February 8, 2022 in the Cantlon-Otterness & Viets Funeral Home with burial to follow in the Hopewell Cemetery in Tunas, Missouri under the direction of the Cantlon-Otterness & Viets Funeral Home of Buffalo, Missouri. Visitation will be 10:00 a.m. to 11:00 a.m. Prior to the service. In lieu of flowers memorials may be made to K9's for Camo. To send flowers or a memorial gift to the family of Melissa Ruth Trader please visit our Sympathy Store.

Melissa Ruth (Wilkerson) Trader was born to Robert and Mary &#8220;Ruth&#8221; Wilkerson in Macks Creek, Missouri on August 16, 1968. On January 31, 2022 Melissa was reunited with her husband in Heaven. Melissa, known as Missy by those in her... View Obituary & Service Information

The family of Melissa Trader (Buffalo) created this Life Tributes page to make it easy to share your memories.