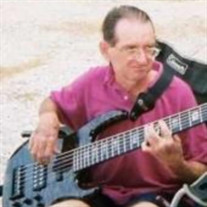 Michael Anthony Slenker, son of Clarence Charles Slenker and Rose Ann Dorf Frazier, was born, March 19, 1958 in St. Louis County, Missouri. He departed this life, Wednesday, November 24, 2021, in his home, Camdenton, Missouri at the age of sixty-three years, eight months and five days. He was preceded in death by his father, Clarence Slenker. Survivors include his mother, Rose Ann Frazier and husband Mike of Camdenton, Missouri; his son, Branduin Slenker; his daughter Charisa Slenker; his three brothers, Christopher Slenker of Texas, Timothy Slenker and wife Barbara of Camdenton, Missouri and Jerome Slenker and wife Cindy of Camdenton, Missouri as well as a host of nieces, nephews, other relatives and many friends. Michael grew up in the Camdenton area and was a graduate of Camdenton High School class of 1976. After graduation, he entered into the United States Army where he worked on missiles. Upon his return home, he attended Linn Tech on a GI Bill, then moved to Texas and worked for Texas Instruments before moving back to Columbia. In his spare time, Michael enjoyed working on electronics and listening to music. He was a talented guitar player. Michael was a loving dad, son, brother, uncle and a caring neighbor and friend. We celebrate his life and his accomplishments and will treasure the memories he created for his family and friends. Graveside services will be held at 11:00 a.m., Friday, December 10, 2021 at Allee Memorial Gardens, Camdenton, Missouri. Burial will follow in Allee Memorial Gardens. Visitation will be from 10:00 a.m. till 11:00 a.m. in the funeral home. Memorial donations may be made to the family and mailed to Allee-Holman-Howe Funeral Home, 15 Clint Avenue, Camdenton, Missouri 65020 or left at the funeral home. Arrangements are under the direction of Allee-Holman-Howe Funeral Home of Camdenton, Missouri. To send flowers to the family or plant a tree in memory of Michael Anthony Slenker please visit our Tribute Store.

The family of Michael Slenker (Camdenton) created this Life Tributes page to make it easy to share your memories.