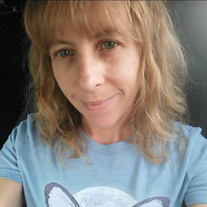 Michelle Marie Tidwell, daughter of Robert D. and Deborah (Hannold) Simcox, was born January 18, 1976, in Sanford, North Carolina. She departed this life Wednesday, April 20, 2022, in her home, in Lebanon, Missouri, at the age of forty-six years, four months, and two days. On June 8, 2013, she was united in marriage to Michael C. Tidwell, and they shared the last seventeen years of happiness and memories. She was preceded in death by her biological father, Terry Whitehill; her mother-in-law, Mary Tidwell; her maternal and paternal grandparents. Michelle is survived by her husband, Michael, of the home, in Lebanon, Missouri; four sons, Nathaniel Tidwell, Devin Blackburn, Orion Tidwell, all of Lebanon, Missouri, and Mason Tidwell, and his wife, Jannessa, of the State of Arizona; a granddaughter; her parents, Robert and Deborah Simcox, of Roby, Missouri; a sister, Candace Simcox, Steve Benner Jr.; niece Hailie Walkup of Roby, Missouri; six nephews; two nieces, Ella and Emma; her father-in-law, Kenneth Tidwell, Sr.; her brothers-in-law and sisters-in-law, Kenneth Tidwell Jr., and his wife, Allison, Leslie Griffin, and her husband, Stephen, Andrew Tidwell, and his wife, Stephanie, all of Lebanon, Missouri; along with special family Sandy and Richard Boone of Michigan; as well as a host of other relatives and friends. She was raised in a military family and graduated from high school in Belgium. She then earned her bachelor’s degree from Drury University in Springfield, Missouri. She was a devoted homemaker to her family and had also worked as a substitute teacher in Lebanon. She currently was an account billing specialist for Petsburgh Therapy Services. She was very talented in artwork and music and was very fond of dragons, cardinals, unicorns and fairies. She liked taking care of her home and spending time with her family, especially her grandchild. Michelle was a loving wife, mother, grandmother, daughter, sister, and was a caring friend. We celebrate her life and know that her family and friends will hold tight to the wonderful memories she made with them during her lifetime. A Memorial has been established to the family, as they plan to create a garden in Michelle's memory. Donations may be made through the funeral home. Memorial Services will be on April 28th at 11:00 AM (CT) at Community Baptist Church, 15905 Missouri 64, Lebanon, MO 65536.

Michelle Marie Tidwell, daughter of Robert D. and Deborah (Hannold) Simcox, was born January 18, 1976, in Sanford, North Carolina. She departed this life Wednesday, April 20, 2022, in her home, in Lebanon, Missouri, at the age of forty-six... View Obituary & Service Information

The family of Michelle Marie Tidwell (Lebanon) created this Life Tributes page to make it easy to share your memories.