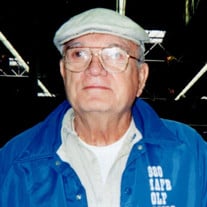 Mike Charles Naglich, son of Mike and Mary Sprajcar Naglich, was born September 13, 1927, in Madison, Illinois. He departed this life Tuesday, August 17, 2021, in Hartville, Missouri, at the age of ninety-three years, eleven months, and four days. On September 3, 1949, he was united in marriage to Arleen Marie Liesmann, and to this union one daughter and three sons were born. He was preceded in death by his parents; his wife of seventy-one years, Arleen, on February 26, 2021; and a sister, Dorothy Steele. Mike is survived by a daughter, Christine Catney, and her husband, Michael, of Iowa City, Iowa; three sons, Mark Naglich, of Fremont, California, Michael Naglich, and his wife, Joanne, of Efland, North Carolina, and David Naglich, and his wife, Nancy, of St. Louis, Missouri; nine grandchildren; three great-grandchildren; as well as a host of other relatives and friends. He was raised in Madison, Illinois, and graduated from Granite City High School. As a young man, he entered the military and served his country faithfully in the United States Army just at the ending of World War II, and served in Korea. After being honorably discharged, he returned to Granite City where he and Arleen made their home and lovingly raised their family. He was employed by National Geospatial Intelligence Agency in St. Louis, Missouri for a time and then began working at Granite City Steel Corporation for a number of years. After retiring, he and Arleen moved to Lebanon, Missouri in 1977. Mike was an active member of St. Francis DeSales Catholic Church where he was very involved in parish activities. He was also a member of the Lebanon Knights of Columbus. He enjoyed doing woodworking projects and had a successful wood crafting business. He liked doing things with his hands, but also enjoyed relaxing watching television westerns or reading. His family was very important to him and he especially enjoyed having time with his grandchildren and great-grandchildren. Mike was a loving father, grandfather, great-grandfather, and was a caring friend. We celebrate his life and know that his family and friends will hold tight to the wonderful memories he made for them during his ninety-three years. Funeral services will be Tuesday, Aug. 24 at 10 a.m. at St. Frances de Sales Catholic Church in Lebanon. A memorial to the Heifer International or Doctors Without Boarders has been established and donations may be left at the funeral home.

The family of Mike C. Naglich (Lebanon) created this Life Tributes page to make it easy to share your memories.