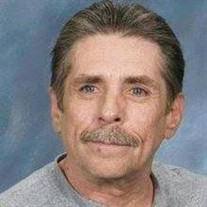 Michael (Mike) Leroy Tittle went to be with his Lord and Savior on Friday, February 26, 2021 at sixty-six years young. He was born November 18, 1954 to Homer Leroy Tittle and Audrey Maxine (Prunty) Godman in North Kansas City, Missouri. Michael enlisted in the United States Army when he was 17 years old. He was a trained paratrooper in the 505th Parachute Infantry Regiment, 82nd Airborne Division at Ft Bragg, NC. He also served time in Korea along the DM Zone. He served his country proudly, before receiving an honorable discharge. He was preceded in death by his parents, Homer Leroy Tittle and Audrey Maxine Godman, a sister, Beverly Jean Moore, and a brother Mark Alan Tittle. Survivors include his daughter, Nancy Michelle Tittle of Kansas City, Missouri, three grandchildren; Anthony Purnell, Israel Purnell and Malachi Randle, a sister, Barbara Pfaffly and her husband Pete of Kansas City, Missouri, a brother, Darell Tittle and his wife Edin of Hartville, Missouri, a stepbrother Carl Godman and his wife Angkana of Tennessee, a stepsister Patricia Godman of Georgia, his aunt and uncle Jim and Margie Madison of Arkansas, his special friends, Cheryl Lowe, Bob Yeager, Carl and Beverly Widner all of Hartville, nieces, nephews, cousins and friends. Michael’s two loves were God and his daughter. He was saved and placed high value in everyone knowing Christ as their Savior. He was a member of the Little Creek Baptist Church at Hartville, Missouri. He taught Sunday School classes, served on the missions building project team at Camp Calvary, served in the outreach Prison Ministry, and pitched in wherever he was needed. He really enjoyed studying the Bible and strengthening his relationship with the Lord. When he could no longer attend Church, his dear friends from Church, Art Vandergrift and John Barron would have Bible study at his home. This meant a great deal to him. He was a loving father, grandfather, brother, uncle, and friend; we will forever cherish the many memories he created. In lieu of flowers please send any memorial gifts to Little Creek Baptist Church, Hartville, Missouri through Holman-Howe Funeral Home, P.O. Box 236, Hartville, Missouri 65667. A memorial service will be held at a later date. He will be interred at the Springfield National Cemetery, Springfield, Missouri.

The family of Mike Tittle (Hartville) created this Life Tributes page to make it easy to share your memories.

Michael (Mike) Leroy Tittle went to be with his Lord and Savior...