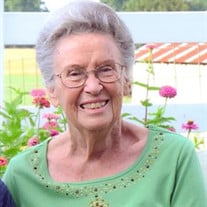 Ruby Nadine Richardson, daughter of Ralph and Pearl Triplett Meents, was born November 26, 1930, in Lebanon, Missouri. She departed this life Wednesday, March 30, 2022, in Cedarhurst of Lebanon at the age of ninety-one years, four months, and four days. On June 7, 1948, she was united in marriage to Lowell Raymond Richardson, and to this union one daughter and two sons were born. She was preceded in death by her parents; her husband of sixty-nine years, Lowell, on January 5, 2018. Nadine is survived by a daughter, Carol Branstetter, and her husband, Frank, of Lebanon, Missouri; two sons, Kurt Richardson, and his wife, Leta, and Kendall Richardson, and his wife, Sara, all of Phillipsburg, Missouri; seven grandchildren, Tyler, Seth, Laura, Allison, Alayna, Sandra, and Vicky; eleven great-grandchildren, Will, Allie, Emma, Luke, McKenzie, Justin, Josh, Jase, Jamie, Travis, and Cody; a brother, Donnie Meents, of Bolivar, Missouri; a sister, Brenda Gardner, of Springfield, Missouri; a sister-in-law, Lela Doing, of Lebanon, Missouri; several nieces and nephews; as well as a host of other relatives and friends. She lived her entire life in Laclede County near Lebanon, Missouri. After she and Lowell were married, they made their home on their farm near Lebanon and lovingly raised their family. Nadine was a devoted farmer’s wife and homemaker and also worked for Walmart for ten years. Nadine was a longtime member of the Church of Christ and was very active and involved in Lee’s Summit Church of Christ which was located near their home. She was very supportive of her church and often hosted preachers and their families during revivals. She enjoyed collecting rocks and arrowheads and loved traveling. She was an avid reader, liked crocheting, and always had a beautiful flower garden. Her family was always at the center of her life and she greatly enjoyed having time with all of her grandchildren and great-grandchildren. Nadine was a loving mother, grandmother, great-grandmother, sister, aunt, and was a caring friend. We celebrate her life and know that her family and friends will cherish the wonderful memories she made for them during her ninety-one years. A special thanks to the nurses and staff at Cedarhurst Assisted Living and Memory Care for their care over the past year. A memorial has been established for New Hope Cemetery and contributions can be made through the Funeral home.

The family of Nadine Richardson (Lebanon) created this Life Tributes page to make it easy to share your memories.