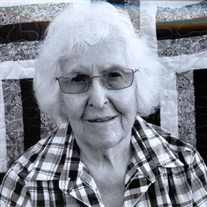 Nellie Nadine Peppers, daughter of Truman and Faye Garrison Henson, was born February 7, 1930, near Lebanon, Missouri. She departed this life Wednesday, February 16, 2022, in her home, near Stoutland, Missouri, at the age of ninety-two years, and nine days. She was preceded in death by her parents; a son, Randall Keith “Cookie” Peppers; two brothers, Bob Henson, and Paul Pulley; and a sister, Helen Pulley. Nellie is survived by a daughter, Juanita Gail Offutt, and her husband, Steve, of Richland, Missouri; a son, Floyd Dennis Peppers, and his wife, Lena, of Eldridge, Missouri; four grandchildren; eleven great-grandchildren; sixteen great-great-grandchildren; a sister, Sue Watson, of Lebanon, Missouri; a number of nieces and nephews; as well as a host of other relatives and friends. She was born and raised in Laclede County, and graduated from Lebanon High School. She continued to make her home near Lebanon, Missouri for most of her life. She worked for a number of years for the old Greyhound Bus Station. She then began a career working as a ward clerk for the Louise G. Wallace Hospital which changed names through the years, until Nellie retired after it became Mercy Hospital. She was always a devoted homemaker to her children and all of her grandchildren. Nellie made her profession of faith in Christ early in her life and was a longtime active member of New Hope Primitive Baptist Church. She enjoyed fishing at Bennett Springs and also liked playing the card game “Pitch”. She was a good cook and enjoyed making special recipes for her family and friends. Her family was very dear to her and she especially enjoyed having time with her grandchildren. Nellie was a loving mother, grandmother, great-grandmother, great-great-grandmother, aunt, and was a caring friend. We celebrate her life and know that her family and friends will cherish the wonderful memories she made for them during her ninety-two years.

Nellie Nadine Peppers, daughter of Truman and Faye Garrison Henson, was born February 7, 1930, near Lebanon, Missouri. She departed this life Wednesday, February 16, 2022, in her home, near Stoutland, Missouri, at the age of ninety-two years,... View Obituary & Service Information

The family of Nellie Nadine Peppers (Lebanon) created this Life Tributes page to make it easy to share your memories.