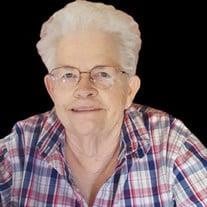 Nellie Mae Spittler was born on August 1, 1940 in Urbana, Missouri to Marshall and Goldie (Garrison) Young, and passed away on June 18, 2022 at the age of 81 at Mercy Hospital in Springfield, Missouri. Nellie married Ronald (Ronnie) Spittler on October 1, 1960 and enjoyed 61 years together. From this union was born one child, Marsha Renee, November 24, 1963. Nellie was saved at and was a member of the Plad Baptist Church. She attended school at Leadmine followed by Tunas High-School. They lived in Plad for 41 years and then moved to Buffalo where they have lived for 21 years. She spent her time as a housewife and enjoyed spending time with her grandkids. She enjoyed camping with Ronnie and their friends at the lake, fishing, visiting with their friends at Nemo Campground, working puzzles, as well as spending time with her family. Nellie was preceded in death by her parents, Marshall and Goldie Young and her great-grandson, Brayden Gamel. She is survived by her husband, Ronnie; her daughter, Marsha; three grandchildren, Dustin, Kasey, and Samone Ronnell; six great-grandchildren, Dalton, Parker, Chloe, Jolene, Dylan, and Charlotte; one brother, Billy Jim Young; and one sister, Mary Lou Stith. She also leaves other family members and many friends who will truly miss her. Funeral services will be held at 2:00 p.m. on Wednesday, June 22, 2022 in the Cantlon-Otterness & Viets Funeral Home. Escorts will be Dalton Roberts, Jeff Roberts, Patrick Christie, Dylan Roberts, Paul Beckham, and Doyle Griffin. Honorary escort will be Parker Simpson. Interment will be in the Maple Lawn Cemetery under the care and direction of the Cantlon-Otterness & Viets Funeral Home of Buffalo. Visitation will be from 6:00-8:00 p.m. Tuesday at the Funeral Home. In lieu of flowers, the family requests donations be made to the St. Jude’s Children’s Hospital. To send flowers or a memorial gift to the family of Nellie Mae Spittler please visit our Sympathy Store.

Nellie Mae Spittler was born on August 1, 1940 in Urbana, Missouri to Marshall and Goldie (Garrison) Young, and passed away on June 18, 2022 at the age of 81 at Mercy Hospital in Springfield, Missouri. Nellie married Ronald (Ronnie) Spittler... View Obituary & Service Information

The family of Nellie Mae Spittler (Buffalo) created this Life Tributes page to make it easy to share your memories.