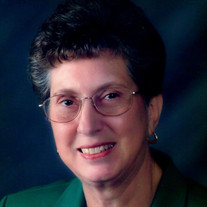 Nina Faye Griffith, daughter of Wayne and Elfa Nora Willard, was born December 31, 1936, in Koshkonong, Missouri. She departed this life Sunday, January 30, 2022, in University Hospital in Columbia, Missouri, eighty-five years of age. On October 8, 1955, she was united in marriage to Robert J. Griffith, and to this union one daughter and one son were born. She was preceded in death by her parents; and two sisters and two brothers-in-law, Glenda and Bob Stokes, and Rosa-Lee and Jerry Switzer. Nina is survived by her loving husband of sixty-six years, Robert, of the home, in Columbia, Missouri; a daughter, Becky Brandt, and her husband, John, of Columbia, Missouri; a son, Jeff Griffith, and his wife Teresa, of Independence, Missouri; two grandsons, Scott Brandt, and his wife, Briana, of Houston, Texas, and Matthew Brandt, and his wife, Cassie, of Columbia, Missouri; a great-grandson, Ryan Brandt, of Houston, Texas; several nieces and nephews; as well as a host of other relative and many friends. She was raised in Koshknonong, Missouri and graduated from Thomasville High School as the Valedictorian of her class when she was sixteen years old. She then began studying at Southwest Missouri State Teachers College. After she and Bob were married, they made their home in Kansas City. They owned and operated department stores in Eldorado Springs, Missouri, Buffalo, Missouri, and a ladies clothing store in Lebanon, Missouri for a total of twenty-two years. Wherever Nina and Bob lived she was involved in all phases of church work in the Baptist Church. She was an excellent pianist and accompanist and enjoyed being a member of numerous women’s groups, including the PEO Club. She was employed as the head receptionist and bookkeeper for Lebanon Daily Record Newspaper for several years. Following that she was employed as the office supervisor at Holman-Howe Funeral Home in Lebanon, where she strived for excellence and exactness. She was warm and compassionate and greeted the public with respect and kindness. A few months ago Nina and Bob moved to Columbia to be near their children. She was an avid reader, greatly loved to cook and was known for her chocolate cake. She loved her family dearly and especially enjoyed having time with her grandchildren and great-grandson. Nina had a strong faith and was a loving wife, mother, grandmother, great-grandmother, aunt and was a caring friend to many. She was the perfect example of a true lady and will always be loved and missed by those who knew her. A memorial to the Claws and Paws Adoption Center in Lebanon has been established in Nina's honor and contributions may be made through the funeral home or by mail to Claws & Paws Adoption Center. P. O. Box # 2025, Lebanon, MO 65536.

The family of Nina F. Griffith (Lebanon) created this Life Tributes page to make it easy to share your memories.