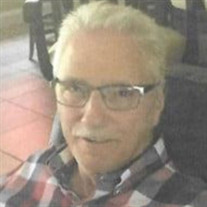 Norman (Norm) David Gould, 76, of Bolivar, MO, passed away from this life, after a short illness, on Tuesday, January 4, 2022 at Citizens Memorial Hospital with his wife Judy, and sister, Sondra, at his bedside. Norman was born on December 19, 1945, in Kansas City , MO, to Clifford (Cliff) DeLyle Gould and Gertrude (Gertie Nichols) Gould. He was united in marriage to Judy (Judith Noelene McCoy) Gilbert on June 20, 1980. As a youngster, Norma excelled in gymnastics, was talented in tap dancing, and mastered ballroom dancing by age 15. He and Judy would wow the spectators with their graceful moves on the ballroom floor. Following the tradition of his father and several brother who were expert chefs), Norm was an excellent cook, and was always pleased to extend his hospitality and fine cuisine to family and friends. After graduating from East High School, Norm began working at the Sears store in Kansas City, MO, eventually going to the Gladstone, MO Sears. He retired after 43 years of faithful service. Shortly after moving to Bolivar, MO in 2008, Norm began a much needed service when he opened “Judy’s Used Appliances” on the Square. He eventually closed up shop in 2019. As a CMH Auxiliary Volunteer, Norm began teaching an exercise class at the Senior Health Center in 2009. Through those years, Norm gave 2,305 hours of volunteer service to help keep seniors healthy. Along the way, he formed many close friendships with the people of Bolivar. His joyful spirit and vitality will be missed by many. Norman is survived by his wife Judy, of the home, and her two children: Jody Lyn (Gilbert) Summers and husband Phil; Teddy Louis (Lou) Gilbert and wife Jana, and their two daughters, Claire and Lanie, of Danville, IN. He had two children by his first wife, Geraldine Greer; her son, Jason Lee Gould and his son Trey, of Kansas City, KS; and daughter Dana Marie (Gould) Crouch and her husband, Kenneth, and their four children, Sarah, Shanna, Amanda, and Kenneth Jr. of Edwardsville KS; two sisters, Sondra (Gould) Busick Gentry-Wright and husband Ronald, of Bolivar, MO; and Marva Ann (Gould) Stowe Welborn and husband Edward, of Warsaw, MO. Norman was preceded in death by his parents and four brothers; Lloyd, John, John, Maurice, and Paul Gould; and one sister, Agnes (Gould) Stanley. He was blessed with many sisters and brothers-in-law, as well as nieces and nephews too numerous to count. A private service for Norman will be held at a later date. In lieu of flowers, memorial contributions may be made to the CMH Senior Health Center in Bolivar. Services for Norman are under the care and direction of the Butler Funeral Home of Bolivar. To send flowers or a memorial gift to the family of Norman David Gould please visit our Sympathy Store.

Norman (Norm) David Gould, 76, of Bolivar, MO, passed away from this life, after a short illness, on Tuesday, January 4, 2022 at Citizens Memorial Hospital with his wife Judy, and sister, Sondra, at his bedside. Norman was born on December 19,... View Obituary & Service Information

The family of Norman David Gould (Bolivar) created this Life Tributes page to make it easy to share your memories.