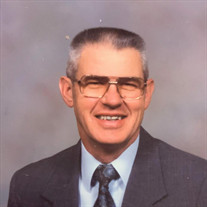 Norman Edward Tolsdorf, son of Ludwig and Juanita Robertson Tolsdorf, was born May 31, 1934, in Grand Junction, Iowa. He departed this life Friday, October 29, 2021, in his home, in Lebanon, Missouri, at the age of eighty-seven years, four months, and twenty-nine days. On November 29, 1959, he was united in marriage to Barbara Ann Richmond, and to this union two daughters were born. He was preceded in death by his parents; and four brothers, Roger, John, Jerry and Richard Tolsdorf. Norman is survived by his loving wife of almost sixty-two years, Barbara, of the home; two daughters, April DeMoss, and her husband, Philip, of Lebanon, Missouri, and Holly Barberra, and her husband, Michael, of Richland, Missouri; three grandchildren; four great-grandchildren; a brother, Larry Tolsdorf, of Wichita, Kansas; a sister, Anne Pfeffer, of Spring, Texas; a number of nieces and nephews; as well as a host of other relatives and friends. He was born and raised in Grand Junction, Iowa and graduated from Grand Junction High School. He joined the military as a young man and served his country faithfully in the United States Army and was a member of the United States Army Chorus. After being honorably discharged, he returned to Iowa and he and Barbara made their home in Armstrong, Iowa. They owned and operated a farm and Norman worked for Quaker Oats. They later moved to Iowa Falls, Iowa. He later worked as a salesman for Cargill and Stockdale Grain Bins. In the late 1990’s, Norman and Barbara moved to Lebanon, Missouri and made their retirement home. Norman worked as a maintenance worker for Lebanon Properties for several years. Norman made his profession of faith in Christ early in his life and was an active member of the First Christian Church in Iowa Falls for many years. Church was always central in his life and after moving to Lebanon he and Barbara became members of First Christian Church where they both sang in the church choir. In his spare time he enjoyed reading and liked being outdoors where fishing and hunting were his favorite activities. He was very friendly and never met a stranger. He was full of energy all the time and was very patriotic and proud of having been a part of the Army Chorus. He loved his family dearly and especially enjoyed having time with his grandchildren and great-grandchildren. Norman was a loving husband, father, grandfather, great-grandfather, brother, uncle and was a caring friend. We celebrate his life and know that his family and friends will hold tight to the wonderful memories he made for them during his lifetime. A memorial to the First Christian Church of Lebanon, Missouri has been established and contributions may be made through the funeral Home.

Norman Edward Tolsdorf, son of Ludwig and Juanita Robertson Tolsdorf, was born May 31, 1934, in Grand Junction, Iowa. He departed this life Friday, October 29, 2021, in his home, in Lebanon, Missouri, at the age of eighty-seven years, four... View Obituary & Service Information

The family of Norman E. Tolsdorf (Lebanon) created this Life Tributes page to make it easy to share your memories.