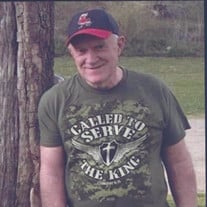 Ronald Lee “Ronnie” Baker, son of Raymond and Cremora Freeman Baker, was born October 5, 1947 in Mansfield, Missouri and departed this life on November 25, 2020 at Cox South Medical Center in Springfield, Missouri at the age of seventy-three years, one month and eighteen days. On August 12, 2007 he was united in marriage to Evelyn (Adamson) and they have shared the last 13 years together. He was preceded in death by his parents, Raymond and Cremora Baker. Ronnie is survived his wife, Evelyn, of the home; children, Rona (Baker) Mainprize and husband, Dr. Keith Mainprize, of Springfield, Tassie Ellis and husband, Rance, of Mansfield, Jacqulyn of Mansfield, Michelle of Rogersville, Melissa of Mtn. Grove and Randy of Minot, South Dakota; sister, Loreta ‘Pat’ Dennis of Mansfield; nephews, Jeff Dennis and wife, Holly of Ohio and Stan Dennis and wife, Mandy, of Texas; 21 grandchildren; 33 great-grandchildren; a host of other relatives and a multitude of friends. He lived almost all his life in Mansfield where he graduated from Mansfield High School in the Class of 1965. He gave his life to the Lord at an early age and had been a minister of the gospel for over 55 years. He thoroughly enjoyed travelling the world and ministering in foreign countries including Haiti, Mexico, Peru, China, Malaysia and Canada to mention a few. He pastored several churches, but Mansfield was always his home. He will always be remembered as a man of faith and was used by God for many signs and wonders. His passion in life was to serve God and win the lost. In his spare time, he loved to hunt, and fish and no crappie was ever safe. Ronnie was a loving husband, father, grandfather, great-grandfather, brother, uncle and a truly caring neighbor and friend. We celebrate his life and although we were not ready to give him up, we know that he is with his Lord and Savior Jesus Christ and nothing gets any better than that. Funeral services will be at 11:00 a.m. Tuesday, December 1, 2020 in Holman-Howe Chapel, Mansfield. In lieu of flowers, contributions may be made to Harvest Project Revival Center

The family of Pastor Ronnie L. Baker (Mansfield) created this Life Tributes page to make it easy to share your memories.