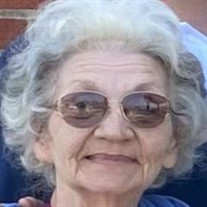 Patricia Jean Fowler, daughter of Homer K. and Melba M. Morehouse Callow, was born February 9, 1949, in Omaha, Nebraska. She departed this life Friday, March 4, 2022, in Lebanon North Nursing and Rehabilitation Center, in Lebanon, Missouri, at the age of seventy-three years, and twenty-five days. On January 15, 1971, she was united in marriage to John Paul Fowler, and to this union four sons were born. She was preceded in death by her parents; her husband, John; a brother, Homer; and a sister, Lavina. Patricia is survived by four sons, Elliott Fowler, and his wife, Kim, Jon Fowler, and his wife, Kim, Brian Fowler, and his wife, Julie, all of Lebanon, Missouri, and Everett Fowler, of Fort Myers, Florida; seven grandchildren, Jordan, Madison, Reagan, Cameron, Tyler, Leah, and Kenzie; a brother, Johnnie Callow, of the State of Nebraska; a sister-in-law, Roxanne Shimizu, of Chicago, Illinois; several nieces and nephews; as well as a host of other relatives and friends. She was born and raised in Nebraska and then moved to Branson in 1979. She and John made their home there until moving to Lebanon in 1989. Patricia was a devoted homemaker to her husband and sons and made a wonderful home for her family. Patricia was raised in the Catholic faith. In her spare time she enjoyed being outdoors where her favorite activity was fishing. She also enjoyed doing craft projects and loved playing games and doing word puzzles. She loved dogs and was especially fond of her miniature Greyhound, “Mabel”. Her family was very important to her and she particularly enjoyed having time with her grandchildren. Patricia was a loving mother, grandmother, sister, aunt and was a caring friend. We celebrate her life and know that her family and friends will cherish the wonderful memories she made for them during her lifetime. A memorial has been established to Claws and Paws and donations may be made through the funeral home.

The family of Patricia Fowler (Lebanon) created this Life Tributes page to make it easy to share your memories.