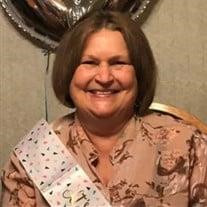 Patricia Lavon Weeks, age 70, of Marshfield, Missouri, passed away Thursday, September 30, 2021 at her home. She was born May 15, 1951, in Wellington, Texas, a daughter of Anton Oliver Weiser and Wanda Lavon (Jackson) Weiser. She was raised in the Rogers, Arkansas area. As a young girl, she attended a revival with her grandmother, Granny Grace, and was saved and baptized. She was a graduate of Rogers High School, where she was on the National Honor Society for all four years. On July 5, 1969, in Rogers, Arkansas, she was united in marriage to Lyndol Gale Weeks. Together they shared the past 52 years of marriage. Their first home together was in the state of Washington while Lyndol served in the U.S. Army. After Lyndol was discharged, they spent a short time living in Northview, Missouri, before moving to Marshfield, Missouri, where they built their home from the ground up. To this union, three children were born: one son, Curtis, and two daughters, Carmen and Jessica. Patricia worked at various jobs throughout her adult life, including Hagle Industries, Hutchens Industries, and Harris Enterprises. She retired in 2015 after working as Deputy Clerk at the Webster County Courthouse. Everywhere she worked, and in everything she did, she followed her personal philosophy, “If you’re going to do something, do it right.” In her spare time, Patricia enjoyed gardening, cooking, sewing and spending time with her grandchildren and great-grandchildren. She was actively involved in all her children’s and grandchildren’s extracurricular activities and was known for being the loudest fan in the stands. Even as a young girl, and throughout her life, she was always taking care of others: her parents, her siblings, her children and their children. She was the bedrock of the family. Patricia was preceded in death by her parents, Anton and Wanda (Jackson) Weiser; father-in-law and mother-in-law, Howard and Retha (Hildebrand) Weeks; sister, Colleen (Weiser) Snyder; and two sisters-in-law, Wendy (Lee) Weiser and Lauren (Weber) Weeks. She is survived by her husband of 52 years, Lyndol Weeks; three children, Curtis Weeks, Carmen (Weeks) Diehl and husband Roy, and Jessica (Weeks) Jennings and husband Wade, all of Marshfield, Missouri; seven grandchildren, Ty Diehl and wife Meredith, Brett Diehl and wife Madison, Drew Diehl, Brady Jennings, Sidney Jennings, Briley Jennings, and soon-to-be Jaisy Jennings; five great-grandchildren, Hudson Diehl, Harper Diehl, Emerson Diehl, Emmett Diehl, and soon-to-be Heston Diehl; her brother, Lyle Weiser of Golden City, Missouri; her sister, Rhonda (Weiser) Blount and husband David of Pea Ridge, Arkansas; brother-in-law Rodney Snyder of Gateway, Arkansas; brother-in-law Garrell Weeks and wife Martha, of Fair Grove, Missouri; sister-in-law Marcy (Weeks) Powell and husband Kevin of Buffalo, Missouri; and a host of other relatives and many friends who will greatly miss her. Services will be held at 1:00 PM, Tuesday, October 5, 2021, at Cantlon-Otterness & Viets Funeral Home, 931 W. Main Street, Buffalo, Missouri. Burial will follow in Macedonia Cemetery. Visitation will be 12:00 PM to 1:00 PM, Tuesday, October 5, 2021, at Cantlon-Otterness & Viets Funeral Home. Memorial donations may be made to Macedonia Cemetery. To send flowers or a memorial gift to the family of Patricia Lavon Weeks please visit our Sympathy Store.

Patricia Lavon Weeks, age 70, of Marshfield, Missouri, passed away Thursday, September 30, 2021 at her home. She was born May 15, 1951, in Wellington, Texas, a daughter of Anton Oliver Weiser and Wanda Lavon (Jackson) Weiser. She was raised... View Obituary & Service Information

The family of Patricia L. Weeks (Buffalo) created this Life Tributes page to make it easy to share your memories.