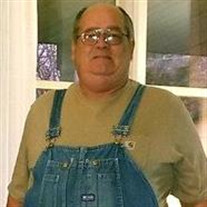 Patrick Dale Heflin was born on February 5, 1958 in New Orleans, Louisiana to John D. Heflin and Linda L. (Milsap) Heflin and departed this life on April 29, 2021 at his home near Pittsburg, MO. He was the fourth child of five. They moved to the Kansas City, Missouri area in his early childhood where he attended James Elementary and Northwest High School until 1974 when he joined the United States Marine Corps. He was a corporal in the USMC and served in the Vietnam war in the sniper unit. He was honorably discharged in 1978. He moved back to the Kansas City, Missouri area and was self employed as a carpenter. Shortly after his return he was reacquainted with Kathy Cornell. They had attended grade school and church together during their childhoods. They dated and were married September 11, 1982. In 1983 they were blessed with their first child, Katie Patricia. Pat then joined the carpenter’s apprenticeship and graduated four years later as a journeyman Union Carpenter. He was a proud loyal member of local 1329. He chose to join the apprenticeship and be a union carpenter to better his family’s life. In 1985 their second child, Zachary Shane was born and in 1988 their third child, Jacob Michael was born. Their family moved from Kansas City, Missouri to Blue Springs in 1986. Pat was a wonderful, loving, devoted husband and father. He participated with his children’s scouts and little league activities. He also enjoyed camping, hunting, and fishing with his family. After fishing many years at Bennett Spring, Missouri, Pat and Kathy purchased land and ran Whistlestop Campground near Bennett Spring. They managed this campground until 2010 when they sold it. Pat bought two houses to renovate and then used as rentals. After selling the campground they moved back to Blue Springs where they resided until 2020. Pat retired from the Union in 2010. He was a proud husband, dad, and grandfather to six: Dylan Patrick (19), Dakota Dawn (18), Lilly Ann (13), Zachary Shane, Jr. (2), Wyatt Edward (23 months), and Jackson Dale (2 months). Pat always strived to give his family the best life and the most opportunities. From attaching a snowplow to his truck, to home remodels, he always worked hard and provided well for his family. Pat was preceded in death by his parents and a brother, John Daniel. He is survived by his wife of 38½ years, Kathy Dawn of the home; daughter, Katie Heflin of Urbana, MO and grandsons, Dylan and Wyatt of Urbana, MO; son, Zachary (Liza) of Odessa, MO and grandchildren, Dakota, Lilly, Zachary, Jr. and Jackson; son, Jacob Michael of the home, Pittsburgh, MO; brother, Larry Heflin (Shirly) of Oak Grove, MO; sister-in-law, Kathy Marie Heflin of Blue Springs, MO; and sister, Jackie Sue Gentry (Don) of Shawnee, KS., Kazan Meierarend (Walt) of Independence, MO as well as many nephews, nieces and great-nephews and great-nieces. He enjoyed his new land and home the last seven months. He loved working on the land, burning leaves and stumps and planting. He lived life to the fullest, was always there to lend a hand, help his children whenever needed and loved his grandchildren. He was loved so much and will be greatly missed. Funeral services will be held at 12:00 p.m. on Thursday, May 6, 2021 in the Cantlon-Otterness & Viets Funeral Home. Escorts will be Dylan Heflin, Roy Smith, James Bell, Shane Sheaffer, Charlie Davis, Scott Ewigman, Antoniao Irizarry, and Cesar Irizarry. Honorary escorts will be Don Cornell, Jr. and David Allen. Visitation will be from 11:00 a.m. to 12:00 p.m. Thursday at the Funeral Home. To send flowers or a memorial gift to the family of Patrick Dale Heflin please visit our Sympathy Store.

Patrick Dale Heflin was born on February 5, 1958 in New Orleans, Louisiana to John D. Heflin and Linda L. (Milsap) Heflin and departed this life on April 29, 2021 at his home near Pittsburg, MO. He was the fourth child of five. They moved to... View Obituary & Service Information

The family of Patrick Dale Heflin (Buffalo) created this Life Tributes page to make it easy to share your memories.