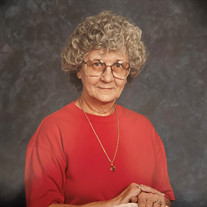 Patsy Jean Eldridge, daughter of Jesse R. and Omia Heflin Clark, was born October 7, 1937, in Jefferson City, Missouri. She departed this life Sunday, February 6, 2022, in her home, in Lebanon, Missouri, at the age of eighty-four years, three months, and thirty days. On July 5, 1970, she was united in marriage to Otis Joseph Eldridge. She was preceded in death by her parents; her husband, Joseph, on January 18, 1990; a son, Kenny Reynolds; a grandson, Andy J.; a brother, Jesse; and two sisters, Omia and Shirley. Patsy is survived by her daughter, Ranae Reynolds, of Lebanon, Missouri; her two sons, Danny Reynolds, and his wife, Doris, of Conway, Missouri, and Clifford Reynolds, of Pineville, Missouri; a daughter-in-law, Betty Reynolds, of Lebanon, Missouri; a number of grandchildren; a number of great-grandchildren; her sister, Mary Willis, of Eldon, Missouri; several nieces and nephews; as well as a host of other relatives and friends. She was raised in the Kansas City area and graduated from high school there. In the 1960’s, she moved to Camdenton, Missouri where she earned her Licensed Practical Nursing degree. She worked as a nurse for Mozark Health Resort for several years. After moving to Lebanon in 2006, she worked for Kentucky Fried Chicken. In her spare time she enjoyed painting and playing Bingo. Her family was very dear to her and she enjoyed spending time with her grandchildren. Patsy was a loving mother, grandmother, great-grandmother, sister, aunt, and was a caring friend. We celebrate her life and know that her family and friends will hold tight to the wonderful memories she created for them during her lifetime. Services for Patsy Eldridge will be Tuesday, March 1 at 6 p.m. at Holman-Howe Funeral Home with David Douglas officiating. Visitation will be Tuesday, March 1 from 5- 6 p.m. in the funeral home. Arrangements are under the direction of Holman Howe Funeral Home in Lebanon, Missouri..

The family of Patsy J. Eldridge (Lebanon) created this Life Tributes page to make it easy to share your memories.