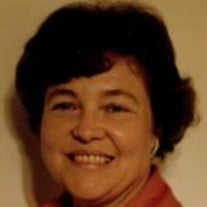 Patsy Pauline Moore (Wright), loving wife, mother and grandmother, was born March 23, 1929 at “The Old Home Place” on Dean’s Creek near Richland, Missouri. She was the fifth child of James and Sybil Wright to whom ultimately 16 children would be born. Her early years were lived on the family farm where she played and worked alongside her parents and sisters in the woods and fields of the beautiful Dean’s Creek Valley. She attended George School and went to church across the creek at Glover’s Chapel. Patsy was always a hard worker and during her younger years she often stayed with other families in the area who needed an extra pair of hands for household chores. During her freshman years, she lived with a family in Kirkwood, Missouri where she worked as a maid, then moved to Brumley where she stayed with Dr. Jones' family and attended school. Eventually she returned to the old home place and graduated from Stoutland High School in 1947. After graduation, she moved to California where she met her “handsome redhead” Lawrence (Larry) Moore. They married on July 26, 1947 and settled in Orange County, where Larry worked for Shell, delivering agriculture products to farmers in the Imperial Valley. They had a small “Chicken Ranch” and Patsy sold chickens and eggs to the local markets. All four of their children were born in California. Patsy was a woman of deep faith and Christian conviction. She was baptized in a creek near Etterville, Missouri when she was nine years old. Together with Larry, they helped establish the Anaheim Church of Christ and the Camdenton Church of Christ. Longing for the beloved Ozark Hills and missing their family lead them to move back to Missouri in 1963. They bought a farm on the Wet Glaize just a few miles from where Patsy was born. They both worked hard farming, raising cattle and Larry would also work and eventually retire from Tan-Tar-A. Patsy and Larry were married for 63 years before his death in 2010. During their latter years they enjoyed the farm, going to flea markets & antique stores and being with their family and church. Patsy was able to remain in her home until she moved to Bristol Manor in October of 2019. She died there on Monday, May 11 at the age of 92. She will be greatly missed by her family and friends whom she loved dearly. Patsy was preceded in death by her husband, Lawrence; and her son, Danny. She is survived by her three children, Myra & husband Joe Colagrossi from Anaheim, California, Connie & husband J.D. Parks of Montreal, Missouri and Mark & wife Colleen Moore of Normal, Illinois. Also surviving are nine grandchildren; nine great-grandchildren; two great-great-grandchildren; six sisters; and two brothers. Arrangements are under the direction of Allee-Holman-Howe Funeral Home To send flowers to the family or plant a tree in memory of Patsy Pauline Moore please visit our Tribute Store.

Patsy Pauline Moore (Wright), loving wife, mother and grandmother, was born March 23, 1929 at &#8220;The Old Home Place&#8221; on Dean&#8217;s Creek near Richland, Missouri. She was the fifth child of James and Sybil Wright to whom ultimately... View Obituary & Service Information

The family of Patsy Pauline Moore (Camdenton) created this Life Tributes page to make it easy to share your memories.