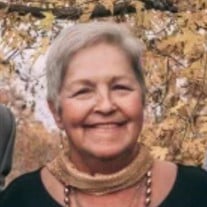 Paula Kay Stepp, daughter of Edward and Elma Snyder Goodin, was born April 7, 1954, in Battle Creek, Michigan. She departed this life Saturday, June 4, 2022, in Lake Regional Hospital, in Osage Beach, Missouri, at the age of sixty-eight years, one month, and twenty-eight days. On May 25, 1989, she was united in marriage to Walter Eliot Stepp, and to this union two daughters were born. She was preceded in death by her parents; and two brothers, Gary and Mike Goodin. Paula is survived by her loving husband of thirty-three years, Walt, of the home, near Lebanon, Missouri; two daughters, Kayla McClure, and her husband Joshua, of Milwaukee, Wisconsin, and Kristi Gan, and her husband, John, of Lebanon, Missouri; a grandson, Dalton Gan; three brothers, Jeff Goodin, and his wife, Joann, Mark Goodin, and his wife, Annette, all of Springfield, Missouri, and Ed Goodin, and his wife, Lorna, of Conway, Missouri; a sister, Sherry Greenman, and her husband, Garth, of Delton, Michigan; several nieces and nephews; a cousin, Diana Stolzman, and her husband, Rick, of Louisville, Kentucky; as well as a host of other relatives and friends. She was born and raised in Battlecreek, Michigan and graduated from North Side High School in Fort Wayne, Indiana. She later moved with her family to Lebanon, Missouri, in the 1970’s, and began working for the H. D. Lee Company. She then worked for Lebanon Care Center for awhile, all while also being a devoted homemaker to her husband and daughters. She was a Green Bay Packers Football fan and a lover of animals, particularly cats. She was an avid reader and was always willing to help anyone in need. Her life revolved around her husband and her family and she especially loved having time with her grandson. Paula was a loving wife, mother, grandmother, sister, aunt, cousin, and was a caring friend. We celebrate her life and know that her family and friends will cherish the wonderful memories she created for them during her lifetime. All services will be private. A memorial has been established for Claws and Paws and donations can be made through the Funeral Home.

The family of Paula Stepp (Lebanon) created this Life Tributes page to make it easy to share your memories.