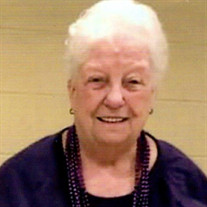 Pearlie Mae White, daughter of Dewey and Erma Davenport Manley, was born January 22, 1944, in Chicago, Illinois. She departed this life Saturday, November 27, 2021, in Mercy Hospital, in Springfield, Missouri, at the age of seventy-seven years, ten months, and five days. On June 26, 1962, she was united in marriage to Donnie Lee White, and to this union four sons were born. She was preceded in death by her parents; her husband, Donnie, on February 18, 2017; two brothers, Johnny Combs and Isaac Combs; and two sisters, Josephine King, and Pat Camper. Pearlie is survived by four sons, Danny White, and his wife, Labecca, of Sedalia, Missouri, Clinton White, and his wife, Larrie, of Billings, Missouri, Kenneth White, and his wife, Peggy, and Steven White, and his wife, Trish, all of Lebanon, Missouri; fourteen grandchildren; a number of great-grandchildren; a brother, Steven Combs, of Lynwood, Illinois; four sisters, Shirley Thurman, of Peru, Illinois, Wilma Kincade, of Republic, Missouri, Leona Lowe, of Springfield, Missouri, and Elaine Brown, of Bolivar, Missouri; a number of nieces and nephews; as well as a host of other relatives and friends. She was raised in the bootheel of Missouri. After she and Donnie were married, they made their home in Illinois for several years where she earned her GED before moving to Lebanon, Missouri in the late 1970’s. In addition to being a devoted homemaker to her husband and sons, she worked at Walmart of over twenty years, retiring in 2019. She enjoyed her work and her co-workers. Pearlie had made her profession of faith in Christ and was a member of the Church of God, most recently the West Side Church of God. In her spare time she enjoyed baking, and cooking, especially for Christmas. She liked spending time with her children and grandchildren and loved her family dearly. Pearlie was a loving mother, grandmother, great-grandmother, sister, aunt, and was a caring friend. We celebrate her life and know that her family and friends will cherish the wonderful memories she created for them during her lifetime. Memorial to American Cancer Society

The family of Pearlie White (Lebanon) created this Life Tributes page to make it easy to share your memories.