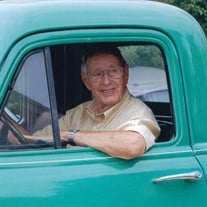 Ralph Wayne Whitworth and his twin brother Roy were born to Orie and Ila (Morgan) Whitworth in Roach, Missouri, on April 30, 1928. The twins joined older brother Farris and soon had two younger sisters, Peggy Blake and Rita Fera. From an early age, Wayne displayed the hard work and industriousness that he would be known for the rest of his life. Wayne and Roy attended Parrack Grove School and Camdenton High School, from which they graduated in 1947. In the summers and when not in school, Wayne cut wood with his dad and Roy, his inseparable brother and best friend. The twins worked at the local sawmill together and helped with the family farm. As teenagers, they contracted with the Parrack Grove School to provide wood for the school year. Wayne always thought his father was the hardest working man he knew. His daughters say the same of their Dad. After high school, the twins briefly left Camden County for Oregon to cut timber in a logging camp. Roy returned to marry his sweetheart, Hazel, and Wayne joined the Army. He served stateside in Texas and achieved the rank of Corporal. Upon returning to Camdenton, Wayne worked in service stations for his Uncle Ralph. On July 10, 1953, after years of mutual attraction, Wayne married Mildred Rooffener at Bridal Cave. Initially, the couple ran a waste disposal business in Camdenton. They soon bought land and started a cattle and hog farm. Wayne and Mildred raised five girls, of whom both he and Mildred are exceedingly proud. They were members of First Baptist Church of Camdenton and brought the girls with them as much as possible. Without complaint, Wayne shuttled his girls across the county to school and various functions. He eventually taught them how to drive themselves – a testament to his even temper and patience, which would serve him well in his next career. He always praised his girls for their good grades, for their strong work ethic and their involvement in school activities. In 1964, Governor Warren Hearnes appointed Wayne to serve as the Camden County Assessor. His visionary leadership over the next 32 years in office helped optimize the overall valuation of the county, bringing numerous undeclared properties onto the county record books. In 1964, Camden County’s valuation was $30 million. In his first year as Assessor, Wayne discovered unassessed property with a valuation of $13,500,000. Wayne modernized the Assessor’s office recordkeeping. For the statewide 1984 reassessment, Wayne developed a plan to document each property in Camden County with a sophisticated, computerized assessment appraisal program, under which each property was assigned a parcel number, cross indexed and updated yearly. According to Bruce Davis, Chairman of the Missouri State Tax Commission, Camden County’s assessment program served as a prototype for other counties to emulate and was adopted by other assessors across Missouri. Wayne’s service as Assessor helped ensure Camden County had a solid financial foundation that, in turn, secured our strong, vibrant public school system. Wayne’s kindness and easygoing manner helped him to be re-elected as Assessor over three decades. As one of few Democratic officeholders in the courthouse, he worked well with other office holders regardless of their political affiliation. Wayne highly valued his dedicated, hard-working staff, who became part of the family. In 1997, Wayne retired after devoting over 32 years to Camden County. The county's property valuation at the time he retired had grown from $30 million in 1964 to over $670 million dollars. Following retirement, Wayne and Millie spent several years traveling. They visited relatives across the country, took trips to Alaska, the Dakotas, many Western states and Washington, D.C. They wintered in southern Texas for nearly a decade. Camden County was where their hearts were. In the past two decades, they appreciated living in Camden County and looked forward to spending time with their daughters and their families. Wayne loved Harry Truman and Jimmy Carter, gospel, country and bluegrass music, teasing Millie as much as she would allow, tending to his family farm, and Christmas ham on a biscuit. Wayne is survived by his wife, Mildred, with whom he enjoyed 68 years of marriage, as well as his sisters Rita Fera and Peggy Blake. He leaves behind his daughters Jennifer Weaver, husband Johnny and children Jake, Jeff, and Jordan; Janine Bullock, husband Glenn and children Josh and Morgan; Tracey Katsev, husband Mike and children Abby, Conner and Riley; Sara Brockmeyer, husband Chuck and children Elizabeth, Luke, Will and Zack; and Angie Arcipowski, husband John and children Sam, Jenna, Alex and Claire. Wayne and Mildred also have sixteen great grandchildren. Wayne was preceded in death by his parents, Orie and Ila Whitworth, his brothers Farris and Roy and his grandson Jonathan. Visitation will be held from 11:00 a.m. – 1:00 p.m., Friday, December 3, 2021 in Allee-Holman-Howe Funeral Home, Camdenton, Missouri. Private burial will take place in Laughlin Cemetery, Camdenton, Missouri. Memorial donations may be made to Laughlin Cemetery, Lake Area Industries or Child Advocacy Center and mailed to Allee-Holman-Howe Funeral Home, 15, Clint Avenue, Camdenton, Missouri 65020 or left at the funeral home. Arrangements are under the direction of Allee-Holman-Howe Funeral Home of Camdenton, Missouri. To send flowers to the family or plant a tree in memory of Ralph Wayne Whitworth please visit our Tribute Store.

The family of Ralph "Wayne" Whitworth (Camdenton) created this Life Tributes page to make it easy to share your memories.

Ralph Wayne Whitworth and his twin brother Roy were born to Orie...