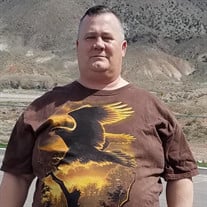 Randy Eugene Anderson, son of William E. and Elizabeth Anne Kogel Anderson, was born April 11, 1960, in Alton, Illinois. He departed this life Thursday, July 29, 2021, in his home, near Lebanon, Missouri, at the age of sixty-one years, three months, and eighteen days. He was united in marriage to Ada Esther Camon, on March, 9, 1990 and to this union two daughters and four sons were born. His parents preceded him in death. Randy is survived by his wife, Ada, of the home; two daughters, Giselle Brooks, of Lebanon, Missouri, and Elizabeth Anderson, of Wood River, Illinois; four sons, Robert “Bobby” Anderson, of Alton, Illinois, David Anderson, of St. Charles, Missouri, Randy Anderson, Jr., of Wood River, Illinois, and Timothy J. Anderson, of Wood River, Illinois; ten grandchildren; three brothers, Timothy Axley, of Lebanon, Missouri, Jeff A. Anderson, of Huntsville, Texas and Doug Anderson, and his wife, Bonnie, of the State of New Jersey; two sisters, Sue Bellamy, and her husband, Gary, of the State of Florida, and Karen Marring, of Brighton, Illinois; several nieces and nephews; as well as a host of other relatives and friends. He was born and raised in the Alton, Illinois community and attended school there. He entered the military as a young man, and served his country faithfully in the United States Army. After being given a medical release with honorable discharge he returned to Illinois. He began a career as a truck driver and worked for various companies through the years. He had recently accepted a position with TNT Trucking. Randy had made his profession of faith in Christ and was an active member of the Church of the Living God in Lebanon. He loved helping people. He enjoyed cooking, liked to talk and never met a stranger. His family was very important to him and he especially enjoyed having time with his grandchildren and great-grandchildren. Randy was a loving husband, father, grandfather, brother, uncle, and was a caring friend. We celebrate his life and know that his family and friends will treasure the wonderful memories he made for them during his lifetime.

The family of Randy E. Anderson (Lebanon) created this Life Tributes page to make it easy to share your memories.