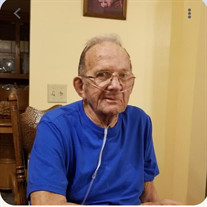 Raymond Richard Mason, son of Fred and Lena Pearl Baker Mason, was born May 25, 1934, in Kirksville, Missouri. He departed this life Tuesday, June 21, 2022, in his home, near Phillipsburg, Missouri, at the age of eighty-eight years, and twenty-six days. In September of 2018, he was united in marriage to Bonnie Evans Williams, and they shared the last three years. He was preceded in death by his parents; his wife, Betty L. Mason; two sons, Raymond DeWayne and Mark Allan; and two daughters, Judy and Anita. Raymond is survived by his loving wife, Bonnie, of the home; his six children, Jody Anderson, and her husband, Donny, Diane Elder, and her husband, Jeff, Vickie Williams, Greg Williams, and his wife, Rhonda, Denny Williams, and his wife, Becky, and Angela Richardson; a number of grandchildren and great-grandchildren; a sister, Hannah Kellam; several nieces and nephews; as well as a host of other relatives and friends. He was born and raised in Kirksville, Missouri as one of thirteen children in his family. He served his country faithfully in the United States Army for several years, and then he moved to Iowa, where he worked as a carpenter throughout his life. In 1980, he moved to Phillipsburg, Missouri and made his home. Raymond had made his profession of faith in Christ and was a member of Second Freewill Baptist Church. He belonged to the Eagles, a veteran’s organization. He liked doing woodworking projects, and built his own house. He enjoyed fishing, looking for antiques, and spending time at the Sale Barn. His family was very important to him and he especially enjoyed his grandchildren and great-grandchildren. Raymond was a loving husband, father, grandfather, great-grandfather, brother, uncle, and was a caring friend. We celebrate his life and know that his family and friends will hold tight to the wonderful memories he made for them during his eighty-eight years. All services will be private..

Raymond Richard Mason, son of Fred and Lena Pearl Baker Mason, was born May 25, 1934, in Kirksville, Missouri. He departed this life Tuesday, June 21, 2022, in his home, near Phillipsburg, Missouri, at the age of eighty-eight years,... View Obituary & Service Information

The family of Raymond Richard Mason (Lebanon) created this Life Tributes page to make it easy to share your memories.