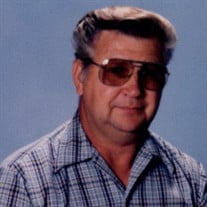 Johnnie Dale Caffey, better known as “J.D.” and “Brother Jay”, was born November 10, 1943 in Phillipsburg, Missouri to John and Mae Ware Caffey. He departed this life Monday, October 18, 2021, with his wife by his side, in his home, in Conway, Missouri, at the age of seventy-seven years, eleven months, and eight days. On September 27, 1963, he was united in marriage to Lauretta Pauline Holiday, and to this union one son, Randy Dale Caffey, was born. His parents preceded him in death. Johnnie is survived by his loving wife, Lauretta of the home; a son Randy Dale Caffey, and his wife Lori Ann of Lebanon, Missouri; two grandchildren, Nathanial Ryan, of Independence, Missouri and Brandi Nicole, of Conway, Missouri; his sister, Loretta Day, and her husband, Ivan; a sister-in-law, Carrie Mathews; a number of nieces and nephews; as well as a host of other relatives and many friends. He was raised in the Phillipsburg and Conway area and graduated from Conway High School in the Class of 1961. After he and Lauretta were married, they made their home in Conway and lovingly raised their son. Johnnie was a professional carpenter in and around Lebanon for all of his life. Johnnie was saved early in his life and was ordained into the Freewill Baptist ministry in 1970. He served several churches in the surrounding counties through the years including Calvary, Crossroads, Lone Rock, and Urbana Freewill Baptist Churches. He also served as fill-in pastor for several other churches in the surrounding counties. His mission was to help people find the Lord, “to be born again”, and serve his family. He loved being outdoors where his favorite activities were mushroom hunting and fishing. He loved to fish for Walleye and always seemed to catch the big one. He passed on his love of fishing to his son and they would go fishing anytime they could. His family was very important to him and he especially enjoyed having time with his son and grandchildren. Johnnie was a loving husband, father, grandfather, and was a caring friend. We celebrate his life and know that his family and friends will hold tight to the wonderful memories he made for them during his lifetime. Visitation will be held Thursday, October 21, 2021 from 10:00 A.M. - 11:30 A.M. at the Holman-Howe Funeral Home in Lebanon, Missouri. Services will be held at 11:30 A.M., Thursday, October 21, 2021 at the Holman-Howe Funeral Home in Lebanon, Missouri with Brother Bruce Blankenship officiating. Burial will be in Graham Cemetery in Conway, Missouri. A memorial has been established and contributions may be made through the funeral home.

The family of Rev. Johnnie "J.D." Caffey (Lebanon) created this Life Tributes page to make it easy to share your memories.