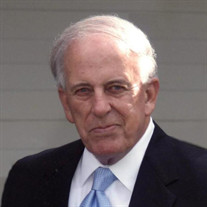 Richard Demuth Clark, son of Henry B. “Bud” and Dorothy Demuth Clark, was born January 13, 1938, in Springfield, Missouri. He departed this life Sunday, May 8, 2022, in his home, near Lebanon, Missouri, at the age of eighty-four years, three months, and twenty-five days. He was preceded in death by his parents; a brother, James Whitley Clark; and several aunts. “Dick”, as he was called by his family and friends, is survived by two sons, Tony Clark, and his wife, Tara, of Boston, Massachusetts, and Ryan Clark, and his wife, Amy, of Kansas City, Missouri; four grandchildren, Hollen, Darren, Brendan, and Mason; as well as a host of other relatives and many friends. He was born and raised in Laclede County, near Lebanon, Missouri, and was a direct descendent of two Lebanon Pioneer families, both the Clarks and the Demuths, who were instrumental in the development of the Lebanon Wholesale Grocers. Although Dick was very humble and quiet about his family history, he was proud to be associated with the business history that began with his family. Dick graduated from Lebanon High School and then attended Drury University for a couple of years, where he played golf and basketball. He founded and operated Clarks Men’s Wear in downtown Lebanon, a business which he ran for fifty years. He was a longtime member of First Christian Church of Lebanon, where again his family was a part of the church history for many years. He belonged to the Lebanon Country Club and enjoyed playing golf throughout his life. He liked sports of all kinds and was a huge fan of the St. Louis Cardinals. He enjoyed listening to their games, and often had the radio playing in the background at the store whenever there was a game on. He was very faithful and devoted to his store which a fixture in downtown Lebanon for a number of years. He loved his family dearly and especially enjoyed having time with his grandchildren. Dick was a loving father, grandfather, and was a caring neighbor and friend. We celebrate his life and know that his family and friends will hold tight to the wonderful memories he made for them during his eighty-four years. A memorial has been established to First Christian Church and donations many be left at the funeral home.

The family of Richard “Dick” Demuth Clark (Lebanon) created this Life Tributes page to make it easy to share your memories.