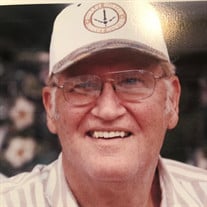 Richard Lee Goffe, son of Peter Dominque and Ann Kruzich Goffe, was born June 13, 1934, in Jerome, Iowa, the oldest of four children. He departed this life Saturday, April 24, 2021, in Lebanon, Missouri, at the age of eighty-six years, ten months, and eleven days. His parents preceded him in death. Richard is survived by his wife, Maxine, of the home; a son, Ron Goffe, and his wife, Mary, of Geneseo, Illinois; a daughter, Cheryl Schneider, of the State of South Carolina; a step-daughter, Donita Winkelmann, and her husband, Ken, of Lebanon, Missouri; seven grandchildren, Ronee, Jeremy, Jamie, Robert, Tim, Taylor and Travis; three great-grandchildren, Cade, Avery, and Cohen; a brother, Larry Goffe, of Lebanon, Missouri; two sisters, Loretta Meyers, and her husband, Doc, of Coal Valley, Illinois, and Jean Frison, of Davenport, Iowa; several nieces and nephews; as well as a host of other relatives and friends. He was raised in the Centerville, Iowa area and attended school there. He worked for local farmers in that area until he was fourteen, at which time he began working in a coal mine near Centerville. At age sixteen, he moved to Davenport, Iowa and worked at a Wareco gas station. While living in Davenport, he went to a local YMCA gym where he learned to box and was classified as a welterweight. He was employed at Case Company for awhile before starting to work at Alcoa Aluminum Company in Bettendorf, Iowa, where he eventually became an inspector. He was a member of the Aluminum, Brick and Glass Workers Union # 105 and served as a committeeman for several years. After retiring, he moved to Lebanon, Missouri. Richard enjoyed camping, fishing, hunting, and archery. He also liked motorcycles. At one time, he owned and operated an Archery Shop. He loved to travel and for many years enjoyed driving his RV and seeing the country. He was also an avid photographer. Richard loved his family get-togethers, cookouts, and being on his pontoon on the lake. He favored homemade ice cream, old western movies, a good cigar, and the simple things in life. Richard was a loving husband, father, grandfather, great-grandfather, brother, uncle and was a caring friend. We celebrate his life and know that his family and friends will hold tight to the wonderful memories he made for them during his lifetime. A memorial has been established for Regional Hospice and contributions may be made through the funeral home.

The family of Richard L. Goffe (Lebanon) created this Life Tributes page to make it easy to share your memories.