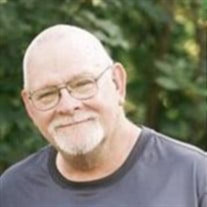 Richard Albert Leo “Potts” Hrdlicka was born January 9, 1946, in St. Louis, Missouri to Joseph and Helen (Ayers) Hrdlicka and passed away February 25, 2022, at the age of 76 years old. Richard was a decorated veteran of the Vietnam War, serving as a Specialist for the United States Army. He was a proud member of the Disabled American Veterans #62 in Buffalo, Mo and enjoyed visiting and assisting with veteran’s whatever way he could. Richard was involved with many community organizations through his love of cooking. He was instrumental in starting the twice monthly breakfasts at Greasy Creek General Store, benefitting local non-profit charities. Richards heart to serve was as big as all the outdoors. Richard married the love of his life, Carolyn (Brandt) Hrdlicka on December 11, 1982 in Salem, Missouri. Richard had one son, Troy Abmeyer of Buffalo Missouri; two grandchildren, Stesha Abmeyer of Desoto, Missouri, Kaden Abmeyer of Buffalo, Missouri; and one foster grandchild, Ashley Rhine. Richards greatest joy was watching his grandchildren in school functions and sports; and was their biggest cheerleader. Richard had many people lovingly refer to him as “Potts” Richard is survived by his wife, Carolyn; son, Troy & special friend Melissa Simpson; grandchildren, Stesha and Kaden; one brother, Joe & wife Joyce; special friends, Paul & Christina Arft, Mary Panzer, Richard Beavers, Dan & Cynthia Bush, and the family of Greasy Creek General Store. Richard was preceded in death by his mother and father; two brothers, Michael & Robert; and foster granddaughter, Ashley. Per Richards wishes there are no services planned. Arrangements were made under the care and direction of the Cantlon-Otterness & Viets Funeral Home in Buffalo, Missouri. To send flowers or a memorial gift to the family of Richard Albert Hrdlicka please visit our Sympathy Store.

The family of Richard "Potts" Hrdicka (Buffalo) created this Life Tributes page to make it easy to share your memories.