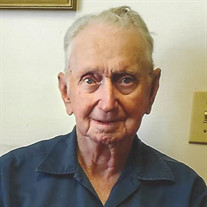 Robert "Bob" Dugger, was born November 16, 1927 in Wright County, Missouri to William and Carlee Belle Dugger. He departed this life, Sunday, August 1, 2021 at his home in Hartville, Missouri surrounded by his family at the age of ninety-three years, eight months and sixteen days. Bob married Della Marie Moore November 15, 1947. They celebrated 66 years of marriage before her death on January 31, 2014. Also preceding him in death were his parents, an infant son, Carey Dugger, two granddaughters, Christy Gates Simpson and Leighann Dugger, three sisters and two brothers. Survivors include his children; Jerry Dugger and his wife Shirley of Grovespring, Missouri, Geraldine Barks and her husband James of Pomona, Missouri and James Dugger of Hartville, Missouri, four grandchildren: John Dugger and his wife Hayden of Lebanon, Missouri, Cary Gates and his wife, Charissa of Radcliff, Kentucky, Steven Gates and his wife Tae of Springfield, Missouri and Megan Petty and her husband David of Hartville, Missouri. Twelve great grandchildren, Carter, Aubree and Avery Dugger, Chelsey Shearin, Chloe Simpson, Andrew, Abby, Bree and Bryson Gates, Leah, Jaylon and Jayten Petty, nieces, nephews, cousins and other relatives and friends also survive. Bob was a faithful member of the Hartville Free Will Baptist Church where he served as a deacon beginning in the early 1960's. He looked forward to attending the men’s prayer breakfast each week at the church. He helped with many projects at the church and donating land for the parsonage. Bob retired from the City of Hartville in 2018 where he worked as water superintendent for over 40 years. He also served as mayor, alderman and police chief in Hartville. Bob was Wright County Public Administrator for 12 years. In addition to working for the city he operated a backhoe service and dug graves in Wright and surrounding counties for over 50 years. He opened graves in more than 114 different cemeteries. In addition to working at different jobs, he volunteered in the community. He served as assistant fire chief for over 30 years, helped clean out the lake at the city park, served on the Steele Cemetery Board where he helped with the upkeep of the cemetery, assisted the Hartville Garden Club in setting up annually the Christmas Nativity scene and other things around Hartville. He was always trying to do what was best for the community. Bob was a member of the Oddfellows Lodge in Hartville for many years. He took great pride in everything he did and enjoyed helping people. He was a man of many talents. At a younger age, he drove a school bus, operated and owned his own garage, and was an ambulance driver for a local funeral home. Bob loved spending time with his family. His kids and grandchildren were his pride and joy. He also liked to hunt and fish. When he was over 90, he shot his first turkey and last deer. He enjoyed traveling, and his highlight was traveling with Della to Hawaii. Bob will be missed by all who knew him. He was a great husband, dad, father-in-law, grandpa and great grandpa, brother and friend. We treasure and celebrate his life and accomplishments. Services for Robert "Bob" Dugger will be held on Saturday, August 7, 2021, at 2:00 p.m. in Hartville Free Will Baptist Church, Hwy Z north of Hartville with burial in Steele Memorial Cemetery, Hartville, Missouri. Visitation is Friday evening, Aug. 6, from 6-8:00 p.m. in the church. Memorial donations may be made to Steele Memorial Cemetery in care of the funeral home at PO Box 236, Hartville, Missouri 65667.

Robert "Bob" Dugger, was born November 16, 1927 in Wright County, Missouri to William and Carlee Belle Dugger. He departed this life, Sunday, August 1, 2021 at his home in Hartville, Missouri surrounded by his family at the age of ninety-three... View Obituary & Service Information

The family of Robert "Bob" Dugger (Hartville) created this Life Tributes page to make it easy to share your memories.