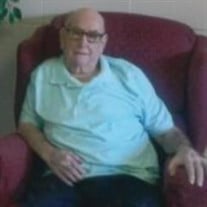 Robert (Bob) E. Morgan, 91, of Montreal, Mo. Passed away on Friday, August 20, 2021 at the Richland Care Center. He was born January 15, 1930 in St. Louis, MO. He grew up in Kansas before moving to the lake in 1985. Throughout his life, Bob owned a roofing company, built homes, was a truck driver and a general manager for multiple trucking companies. He was baptized at a young age and remained a member of the church family. In addition to his parents, he was preceded in death by his wife of 56 years, Anna Mae Morgan; an infant son, Richard Morgan; and a daughter, Debbie Gowin. Survivors include daughter, Dorothy Jean Folks (Aaron) of Montreal, MO; son, Bobby Morgan of Greenview, MO; and son Rick Morgan of Harrisonville, MO. Bob also had 11 grandchildren, 22 great-grandchildren and 6 great-great grandchildren. Pallbearers will be Justin Fulton, Jerry Gowin, Darren Gowin, Eric Folks, Ethan Folks, Dusty Roberts and Rusty Mealor. Services will be held at Allee-Holman-Howe Funeral Home in Camdenton, MO. with Shirley Williams officiating. Visitation will be from 10:00 a.m. until the time of service at 11:00 a.m. on Wednesday, August 25, 2021. Burial will follow in Allee-Memorial Gardens, at 400 Old South Highway 5, Camdenton, Missouri. In lieu of flowers, the family requests donations be made to the choice of the donor and may be mailed to the funeral home at 15 Clint Avenue, Camdenton, Missouri 65020. To send flowers to the family or plant a tree in memory of Robert Edgar Morgan please visit our Tribute Store.

The family of Robert Edgar Morgan (Camdenton) created this Life Tributes page to make it easy to share your memories.