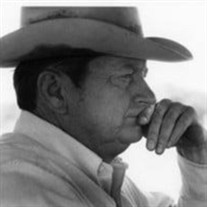 Robert Earl Kifer, born November 22, 1931, of Bolivar, Mo, entered heaven on February 10th, 2022. He was the only child of Floris Frieze and Charles Everett Kifer, both of Polk County. A Bolivar native, he was a graduate of Bolivar High School and attended Southwest Baptist College before graduating from the University of Missouri in Columbia in 1954 with a degree in Animal Husbandry and Agriculture. In high school, Robert was a leader in FFA and a track star, in which he held records that stood for decades after his graduation. He was a member of Alpha Gamma Sigma Fraternity during his University years. Following graduation, he served in the US Air Force for three years: he served in Korea immediately after the conflict ended, aiding in its restoration. Robert was married to Betty Jean Alice Holt on September 13, 1953. From this marriage came Thane Holt Kifer, Thaila Renee Pickett, and Thora Lynn Anderson. Robert was a lifelong Missouri rancher, developing an outstanding cow/calf operation. Robert acted as an unofficial mentor to many of Polk County’s current premier cattlemen, sharing his knowledge unselfishly with the next generation of ranchers. He continued to support FFA throughout his life. In the late 1950’s, recognizing that Bolivar’s future prosperity required more than one bank, Robert was one of the incorporators of Farmers and Merchants Bank of Bolivar (now Commerce Bank) and served on their board of directors for many decades. He also served on the board of Southwest Electric Cooperative, a co-op that his father, Charles Kifer, was instrumental in starting. Robert also served on the Citizen’s Memorial Hospital Foundation board for decades. Robert, or Cowboy Bob as he was referred to, entertained many Bolivar groups with his engaging Cowboy Poetry. Robert will be welcomed in Heaven by his wife Betty who passed in 2021; their daughter, Thaila Pickett, who passed away in 2017; and great-granddaughter Celia Kifer who passed in 2020. He is survived by his son Thane and wife Suzanne; his daughter Thora and husband Brian; his grandchildren: Drew Kifer and wife Jessica, Troy Kifer, Zoe Anderson, and Luke Anderson; and two great-grandchildren: Cora Kifer and James Kifer. Visitation will be held at Butler Funeral Home from 10-11 AM on Saturday, February 19th, with a graveside service held at Greenwood Cemetery immediately following. In lieu of flowers, donations may be made to the Bolivar Kiwanis Club where Robert was a faithful member, or the Vineyard Community Charities, Glendale, AZ, a ministry of the church that Thora and Brian both pastor. Ecclesiates 3:1-2 For everything there is a season, a time for every activity under heaven. A time to be born and a time to die. A time to plant and a time to harvest. To send flowers or a memorial gift to the family of Robert Earl Kifer please visit our Sympathy Store.

Robert Earl Kifer, born November 22, 1931, of Bolivar, Mo, entered heaven on February 10th, 2022. He was the only child of Floris Frieze and Charles Everett Kifer, both of Polk County. A Bolivar native, he was a graduate of Bolivar High School... View Obituary & Service Information

The family of Robert Kifer (Bolivar) created this Life Tributes page to make it easy to share your memories.