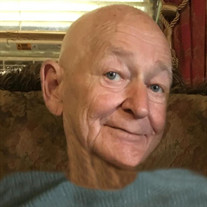 Ronald Lee Bruhn, son of George and Dorothy Ream Bruhn, was born October 29, 1941, in Chicago, Illinois. He departed this life Thursday, March 4, 2021, in his home, in Lebanon, Missouri, at the age of seventy-nine years, four months, and six days. He was preceded in death by his parents; a great-granddaughter, Hailey Dawn Owen; a brother, George Hill; and a sister, Charlene Donlan. Ron is survived by two daughters, Tammy Bruhn, and Berlinda Owen, and her husband, Scott, all of Lebanon, Missouri; a son, Eddie Bruhn, and his wife, Kristi, of Spring Lake, North Carolina; five grandchildren, Scott Owen, Megan Bruhn, Michalla Whaley, and her husband, Noah, Elijah Owen, and his wife, Shayla, and Ethan Bruhn, and his wife, Kelsi; nine great-grandchildren; two sisters, Rosie Gawlak, of Chicago, Illinois, and Patsy Longanecker, and her husband, Ron, of Chicago, Illinois; several nieces and nephews; as well as a host of other relatives and friends. He was born and raised in Chicago, Illinois, and worked at the loading docks for several years. He then moved to Lebanon, Missouri, where he was employed at Lowe Boats for twenty-three years. During his entire life he was a devoted body builder and a fearless man. He greatly loved his family and especially enjoyed having time with his grandchildren. He liked teaching his grandchildren to make arrowheads and giving them suggestions on how to live their lives. He also liked fishing in his spare time. Ron was a loving father, grandfather, great-grandfather, brother, and uncle, and was a caring friend. We celebrate his life and know that his family and friends will treasure the wonderful memories he made for them during his lifetime.

Ronald Lee Bruhn, son of George and Dorothy Ream Bruhn, was born October 29, 1941, in Chicago, Illinois. He departed this life Thursday, March 4, 2021, in his home, in Lebanon, Missouri, at the age of seventy-nine years, four months, and six... View Obituary & Service Information

The family of Ronald L. Bruhn (Lebanon) created this Life Tributes page to make it easy to share your memories.