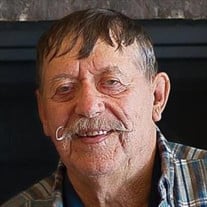 Ronald Dale Jones, son of Ivan Dale and Maryetta Officer Jones, was born May 16, 1948, near Grovespring, Missouri. He departed this life Friday, February 4, 2022, in Phelps County Hospital, in Rolla, Missouri, at the age seventy-three years, eight months, and nineteen days. On April 21, 1967, he was united in marriage to Patricia Ann Lewis, and to this union four daughters and one son were born. He was preceded in death by his parents; a daughter, Denise Ann; and an infant sister. Ronald is survived by his loving wife of fifty-four years, Pat, of the home in Grovespring, Missouri; three daughters, Denean Ellingson, and her husband, Richard, of Grovespring, Missouri, Lucinda Oliver, and her husband, Bobby, of Ozark, Missouri, and Amanda Burris, and her husband, Glendon, of Hartville, Missouri; a son, JR Jones, and his wife, Ashley, of Grovespring, Missouri; fourteen grandchildren; a number of great-grandchildren; as well as a host of other relatives and friends. He lived most of his life in the Grovespring area and graduated from Conway High School. After he and Pat were married, they made their home near Grovespring and lovingly raised their family. Ron worked throughout the years as a truck driver, retiring from Fed Ex after the last twenty years with that company. Ronald had professed his faith in Christ early in his life. He had attended Ozark Community Chapel near Morgan, Missouri. He loved music, especially country and gospel and was an excellent guitarist. He loved playing the guitar for the elderly. He liked to talk and was quite a good storyteller. His life rotated around his family and friends, and he loved his family dearly. Ronald was a loving husband, father, grandfather, great-grandfather, and was a caring friend. We celebrate his life and know that his family and friends will hold tight the wonderful memories he made for them during his life

The family of Ronald D. Jones (Lebanon) created this Life Tributes page to make it easy to share your memories.