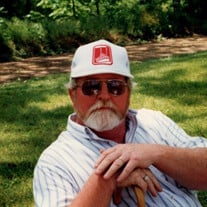 Ronnie Stephen Knight, son of Othel Clarence and Mary Virginia (Dowell) Knight was born May 26, 1947, in Buffalo, MO at the home of his grandparents, Joe Lee and Jessie Rilda (Line) Dowell. He passed away at the age of 74 on Wednesday, April 20, 2022 in Mercy Hospital in Springfield, Missouri. Ronnie attended Bacon and Dry and Dusty Schools growing up, graduating from Lebanon High School in 1965. He went on to college at Southwest Missouri State University (now MSU), married and had two sons, Gregory Stephen and Richard Allen. He worked for 28 years at Justice Furniture in Lebanon, making many friends. He was known to help anyone who found themselves in need. Once his eyesight wouldn’t allow him to drive or work any longer, antiquing became more than a hobby he’d had since the 1970’s. He searched garage sales, flea markets and auctions for items to stock his booths in many area antique stores. He was very successful and thoroughly enjoyed bargaining! He married Sherry Priest on July 1, 1993, at Lavern’s Wedding Chapel in Miami, OK. They lived for a time in Lebanon, later moving to a small farm in Conway where they enjoyed having space for their horses and raising beautiful Shetland Sheepdogs (Shelties). He was a total sports fanatic. Though his eyesight prevented him from ever playing a sport, it never stopped him from enjoying ALL sports. Whether it was listening avidly on the radio, or with his face close to the television, baseball cards spread all over his lap, it was truly a passion for him. Ronnie grew up attending Liberty Freewill Baptist Church in Phillipsburg and was baptized at Brush Creek as a young man. Later, he and Sherry enjoyed their church family at Conway Assembly of God. He always encouraged everyone he knew to develop a relationship with God and recognized it as the most important decision of life. Rod, as he was affectionately called by his family, was homebound for the last several years of his life, due to chronic kidney disease. Sherry lovingly cared for him at home, allowing him to enjoy his ball games and being surrounded by what he loved. He was preceded in death by his parents, Othel and Virginia Knight, grandparents, Andrew W. and Anna Margaret (Whitson) Knight and Lee and Jessie Dowell; stepson Craig Moorhous; sisters Darlene Irvine and Deana Neasby Dort; brothers Othel C. Knight, Jr. (Junior) and Thomas (Tommy), his best friend, Ed Tex Benton and many special aunts and uncles. He is survived by his wife, Sherry, sons Greg and Richard, stepdaughter, Carey; four step grandchildren and seven step great grandchildren; sisters Leone Irvine of Buffalo, Gloria Pearcy Mount of Lebanon, Nancy Allison Bruckerhoff and her husband, Duane of Osage Beach, Patty Butler and husband, Delbert (“Beef”) of Rolla, a special cousin that was like a brother, Rick Dowell of Buffalo; his aunt, Jessie Montgomery of Buffalo and many nieces, nephews and cousins. He will be always be missed but remembered with the love and laughter he shared with us. Graveside service will be held Thursday, April 28 ay 10:00 a.m. at White Oak Pond Cemetery near Lebanon. A memorial to White Oak Pond Cemetery has been establised and donations may be made through the funeral home.

Ronnie Stephen Knight, son of Othel Clarence and Mary Virginia (Dowell) Knight was born May 26, 1947, in Buffalo, MO at the home of his grandparents, Joe Lee and Jessie Rilda (Line) Dowell. He passed away at the age of 74 on Wednesday, April... View Obituary & Service Information

The family of Ronnie S. Knight (Lebanon) created this Life Tributes page to make it easy to share your memories.