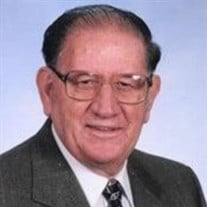 Russell Allen Adams, son of the late Hiram John and Mamie (St. John) Adams, was born on June 27, 1926 in Garden City, Oklahoma and was called into the presence of Jesus on Saturday, August 21, 2021. He was the youngest of ten children, all from the Tulsa, Oklahoma area. He moved with his parents to Clarence, Missouri at an early age to a truck farm. He attended Clarence schools as a child. He was married to Marcella Rae Williams in Hannibal, MO. They fostered one daughter, Debbie Davis Cardwell and adopted two children, Michael Allen and Laura Ellen. This marriage ended at Marcella's death of cancer in 1978. Russell answered God's call to the gospel ministry in 1960 and was ordained in 1962. After his call to the ministry, Russell entered Hannibal La Grange College beginning a life-long pursuit of higher learning. At 65 years old, he earned a Doctor of Ministry degree from Faith Baptist College and Seminary in Anderson, South Carolina. As he continued to take every opportunity to refresh his knowledge of God's Word, he was awarded a Doctor of Divinity (DD HON) from the International Bible Institute and Seminary, Plymouth FL. He pastored churches in Missouri, Oklahoma, and California for forty years. Missouri churches were Southside Baptist, Vandalia; First Baptist, Ewing; Grant City Baptist, Northeast Baptist, Clinton; Harmony Heights, Joplin and First Baptist, Fair Play. While at Harmony Heights in Joplin, he married Susie Kinslow Mabry. She had one foster son, Rick Hall. Russell and Susie made plans to retire in 2000 and moved to Buffalo, MO. Retirement didn't last as he was called as Director of Missions of the Dallas County Association of Southern Baptists in July of that year. He continued to serve in that position until his death. During this time, he also served over 20 years as a Hospice Chaplain for Hospice Compassus in Springfield. Russell's heart cry and passion was that everyone know the Jesus who saved him at age 35. He lived to share God's love, witnessing daily as he walked in the grocery store or went to the bank or post office. His gentle sense of humor and heartfelt love gave him a ready audience. His last week on earth, he led one of his nurses to saving faith in Jesus Christ. Russell is survived by his wife, Susie; his four children, Debbie Cardwell, Warsaw, MO, Laura Adams, Costa Mesa, CA, Michael Adams & wife Diane of Joplin, MO; and Rick Hall & wife Terri of Webb City, MO; five grandchildren; eight great-grandchildren; and one great-great-grandchild. Also surviving is a brother-in-law, Mike Williams and wife Sharon of Troy, Missouri. Funeral services will be held at 2:00 p.m. on Friday, August 27, 2021 in the Legacy Baptist Church with Bro. Clifton Long and Bro. Terry Gentry, Jr. officiating. Escorts will be. Interment will be in the Maple Lawn Cemetery under the care and direction of the Cantlon-Otterness & Viets Funeral Home of Buffalo. Visitation will be from 6:00-8:00 p.m. Thursday at the Funeral Home. Gifts in lieu of flowers may be given to the Dallas County Association of Southern Baptists. To send flowers or a memorial gift to the family of Russell Allen Adams please visit our Sympathy Store.

Russell Allen Adams, son of the late Hiram John and Mamie (St. John) Adams, was born on June 27, 1926 in Garden City, Oklahoma and was called into the presence of Jesus on Saturday, August 21, 2021. He was the youngest of ten children, all from... View Obituary & Service Information

The family of Russell Allen Adams (Buffalo) created this Life Tributes page to make it easy to share your memories.