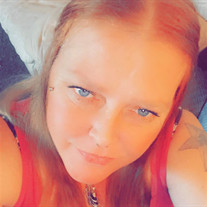 Samantha May Lee Fay Wall, daughter of Ronald and Sandra J. Black Derr, was born October 14, 1979, in Pittsburg, Kansas. She departed this life Wednesday, May 4, 2022, at Mercy Hospital in Lebanon, Missouri, at the age of forty-two years, six months, and twenty days. On December 31, 2009, she was united in marriage to Jeff D. Wall, and they shared the last twelve years of happiness and memories. Her mother preceded her in death. Samantha is survived by her husband, Jeff, of the home, in Lebanon, Missouri; five daughters, Ashlee See, Adrienne See, Bryanna Hawk, and her husband, Austin, all of Lebanon, Missouri, Britany Rojas, and her husband, Edgar, of Tulsa, Oklahoma, Monica Adams of Fort Hood, Texas, and Taylor Wall of Foley, Alabama; two sons, Baylee Wall, and his wife, Tori, of Nevada, Missouri, and Jessie Horseman of Bolivar, Missouri; six grandchildren, Zachary, Amelia, Alyssa, Aden, and Aniya; her father, Ronald Derr, of Rich Hill, Missouri; two brothers, Ronald Derr, Jr. and Jeffery W. Derr, both of Rich Hill, Missouri; several nieces and nephews; and a very special niece Delta Johnson with her wife Cheyenne Johnson and their children; as well as a host of other relatives. She was raised in Rich Hill, Missouri, and graduated from Rich Hill High School. She then attended OTC in Lebanon. She served her country faithfully in the United States Army National Guard for two years. In 2010, she and Jeff moved to Lebanon and made their home. Samantha was a devoted homemaker to her husband and family and also worked at various nursing homes. She was in the process of getting her nursing degree. She had worked as a cook at T’s Redneck Steak House for a time. She loved music and enjoyed singing with her daughter. She liked chomping on ice in her many glasses of Coke each day. She was a hard core people person who was always willing to give advice. She possessed a dark humorous sense of humor and could be very funny and make people laugh. She was talented at calligraphy, excelled at gaming, was a Naturalist and Wickin, was fond of Ozzy Osbourne, and liked puppies. She had three special dogs, Syren, Lucifer “Fur”, and Neagan, and a special cat, Enzo. She loved her family dearly and especially enjoyed having time with her grandchildren. Samantha was a loving wife, mother, grandmother, daughter, sister, aunt, and was a caring friend. We celebrate her life and know that her family and friends will hold tight to the wonderful memories she created for them during her lifetime. A memorial to Claws and Paws has been established and donations may be made through the funeral home.

Samantha May Lee Fay Wall, daughter of Ronald and Sandra J. Black Derr, was born October 14, 1979, in Pittsburg, Kansas. She departed this life Wednesday, May 4, 2022, at Mercy Hospital in Lebanon, Missouri, at the age of forty-two years,... View Obituary & Service Information

The family of Samantha Wall (Lebanon) created this Life Tributes page to make it easy to share your memories.