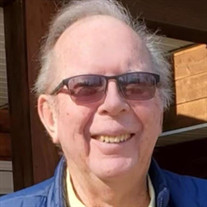 Samuel Wilburn Lewis, son of Ralph Merrill and Gladys Harris Lewis, was born November 28, 1941, in Independence, Missouri. He departed this life Thursday, January 6, 2022, in Mercy Hospital, in Springfield, Missouri, at the age of eighty years, one month, and nine days. On August 9, 1974, he was united in marriage to Sharon Marie Norman. He was preceded in death by his parents; a brother, Charles Franklin Lewis; and a son, Jared Lewis. Samuel is survived by his loving wife of forty-seven years, Sharon, of the home; two daughters, Melissa Ann Wells and her husband Cedric, of Sand Spring, Oklahoma, and Benedette L. Lewis, of Tulsa, Oklahoma; four sons, Seth M. Lewis and his wife Jennifer, of Lebanon, Missouri, Sean A. Lewis and his wife Tasha, of Marionville, Missouri, Clay Samuel Lewis and his wife Cindy, of Pawhuska, Oklahoma, and Jaired C. Lewis, of Denver, Colorado; fourteen grandchildren; as well as a host of other relatives and friends. He was born and raised in the Independence, Missouri area and graduated from William Chrisman High School in the Class of 1959. He entered the military as a young man, and served his country faithfully in the United States Air Force from 1960 until being honorably discharged in 1964. He lived most of life in the Kansas City and Independence area where he worked as a tool and die maker. He retired from this career in 2004. In 2008 he and Sharon moved to Shell Knob, Missouri. He and Sharon then made their home in the Lebanon area this past year near Bennett Spring where he enjoyed fishing. Samuel was an active member of the Church of Jesus Christ of Latter Day Saints. In his spare time he enjoyed being outdoors where fishing was his favorite activity. He was a quiet and reserved man who enjoyed his privacy. He loved his family dearly and especially enjoyed having time with his grandchildren. Samuel was a loving husband, father, grandfather, and a caring friend. We celebrate his life and know that his family and friends will hold tight to the wonderful memories he made for them during his lifetime. Services for Samuel Lewis will be private.

The family of Samuel W. Lewis (Lebanon) created this Life Tributes page to make it easy to share your memories.