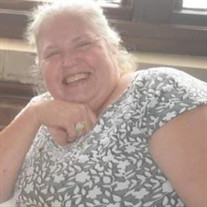 Sandra “Sandy” Lynn Anderson, daughter of Bob and Nelita Hale Lowrance, was born January 30, 1961, in Lebanon, Missouri. She departed this life Sunday, June 13, 2021, in Lake Regional Hospital, in Osage Beach, Missouri, at the age of sixty years, four months, and fifteen days. On November 5, 2015, she was united in marriage to Albert Alvirez, and they shared the last five years. She was preceded in death by her parents; a daughter, Sara Anderson; a son, Ethan Sparks; and a sister, Joann Zeniou. Sandy is survived by her husband, Albert, of the home; two daughters, Tara Routh, and her husband, Thomas, of Lebanon, Missouri, and Chrissy Lowrance, and her husband, Miguel, of Springfield, Missouri; five sons, Brandon Sparks, and his wife, Jennifer, Zachary Sparks, William Sparks, and his wife, Cara, all of Litchfield, Illinois, Nathanial Anderson, and Charles Anderson, both of Lebanon, Missouri; fifteen grandchildren; her step-mother, Mary Lowrance, of Eldridge, Missouri; two brothers, Bruce Lowrance, and his wife, Regina, of Lebanon, Missouri, and Bob Lowrance, of Eldridge, Missouri; a sister, Barbara Groschup, of Waynesville, Missouri; a number of nieces and nephews; as well as a host of other relatives and friends. She was born and raised in the Lebanon area and graduated from Lebanon High School. She then made her home in Fort Worth, Texas for several years, returning to Lebanon in 1999. Through the years, she was a devoted homemaker to her husband and family. Sandy was a member of the Lebanon Church of Jesus Christ of Latter Day Saints. She volunteered at the Lebanon Free Store, and had been a Foster Mother to many children throughout the years. In her spare time she enjoyed fishing, gardening and liked collecting Christmas and Halloween items. Her family was very dear to her and she especially enjoyed spending time with her grandchildren. Sandy was a loving wife, mother, grandmother, daughter, sister, aunt, and was a caring neighbor and friend. We celebrate her life and know that her family and friends will cherish the wonderful memories she created for them during her lifetime. Services are pending and will be announced by Holman-Howe Funeral Home of Lebanon, Missouri.

The family of Sandra L. Anderson (Lebanon) created this Life Tributes page to make it easy to share your memories.