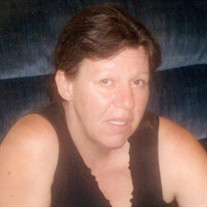 Sandra Kay Turner, daughter of Ira Jeff and Shirley Ann Merritt Bickford, was born March 18, 1965, in Rocky Fort, Colorado. She departed this life Saturday, September 18, 2021, in her home, near Lebanon, Missouri, at the age of fifty-six years, and six months. On January 9, 1986, she was united in marriage to Richard Turner, II, and to this union one daughter and two sons were born. She was preceded in death by her parents; a brother, Lyn Bickford; and a sister, Gwen Green. Sandra is survived by her loving husband of thirty-six years, Richard, of the home; a daughter, Shirley Terry, and her husband, Jim, of Garden City, Kansas; two sons, Richard Turner, III, and Michael Bickford, both of Lebanon, Missouri; five grandchildren; three brothers, Jeff Bickford, of the State of Minnesota, John Bickford, of the State of Colorado, and Red Bickford, and his wife, Gwen, of the State of Texas; six sisters, Billie Kussmer, and her husband, Mike of Monte Vista, Colorado, Wanda McCanless, and her husband, Bill, of Rocky Fort, Colorado, Judy Carroll, and her husband, Mike, of Pueblo, Colorado, Lynda Keilman, of the State of Texas, Dee Bickford, and her husband, Virgil, of the State of Colorado, and Iva Bickford Rhoads, of the State of Utah; a number of nieces and nephews; as well as a host of other relatives and friends. She was born and raised in Colorado where her father worked in road construction. She had graduated high school and had earned her associates degree. She worked as a seamstress for a clothing manufacturing company for a time. She moved around for several years until settling in Missouri in 2000. After she and Richard were married, they made their home near Lebanon and lovingly raised their family. She enjoyed fishing, camping, making dream catchers, and was excellent at remembering and sending cards for everyone’s special occasions. She liked helping others and loved her family dearly. Sandra was a loving wife, mother, grandmother, sister, aunt, and was a caring friend. We celebrate her life and know that her family and friends will hold tight to the wonderful memories she made for them during her lifetime. Arrangements will be under the care and direction of the Holman-Howe Funeral Home of Lebanon, Missouri.

The family of Sandra K. Turner (Lebanon) created this Life Tributes page to make it easy to share your memories.