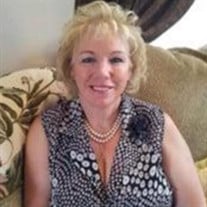 Sarah Ann (Peterson) Dill was born on December 19, 1954 to Francis and Wanda (Massie) Peterson in Lebanon, Missouri, and went to be with the Lord on July 14, 2021. As a child she lived in Twin Falls, Idaho on a ranch, where some of her greatest memories were riding horses and swimming in irrigation ditches. She moved to Pierce City, MO when she was 10 years old. As a teenager, she went to live with her uncle and aunt, Stanley and Thelma Price, on their dairy farm near Lebanon, where she milked, raked hay, and did many other chores. They were like parents to her for the rest of their lives. Sarah was so thankful to Stanley and Thelma for taking her to church. She was saved when she was 15 years old at Charity Missionary Baptist Church down between the benches. She joined the Charity Missionary Baptist Church on August 23, 1970 and moved her membership to Bethel Missionary Baptist Church near Lebanon, MO when they organized. She later rejoined Charity on October 5, 1980, and was a faithful member ever since. Sarah graduated from Lebanon High School in 1973. She married Jerry Dill, who she had met at Charity Church, on June 1, 1973, and they made their home on the family dairy farm near Conway. They were blessed with two sons, Jarrod and Joshua. Sarah so loved when her boys were little, taking them fishing, swimming, playing ball with them, and of course making sure she got them to church. Sarah worked in Bookkeeping at Central Bank in Lebanon for 20 years. Sarah loved spending time with Jerry and the rest of her family. Her kids and grandkids were her world. Going on adventures around the farm with her six grandchildren was her favorite thing. She was so proud of them all. She had a very special relationship with her sister, Linda. The loved spending time together. Sarah and Jerry’s house was the center for families to gather. Her siblings would travel across the country to stay at Sarah’s to spend time with her and enjoy life on the farm. Sarah was preceded in death by her father and mother; her aunt, Thelma Price and uncle Stanley; her father-in-law, Alva Dill; her brother, J.C.; sisters, Lisa Marie and Gayla Peterson; and brother, Guy Gravett. She is survived by her loving husband of 48 years, Jerry; her mother-in-law, Betty; two sons, Jarrod & wife Madeline of Conway, MO and Josh & wife Sarah of Conway, MO; six grandchildren, Luke, Kaylie, Walker, Elijah, Colton, and Emma Dill; her sisters, Linda & husband Lee Kisling of Neosho and Jessie & husband Fred Tews of Twin Falls, ID; and her brothers, Francis “J.R.” & wife Chris Peterson of Syracuse, NE, John David “J.D.” Peterson of Montgomery, AL; and her brother-in-law, Jack & wife Patty Dill of Conway, MO. She also leaves many special nieces, nephews, cousins, and friends who will all truly miss her. Sarah was a very special wife, mother, sister, aunt, and friend. Her passing has left a hole in our hearts and our family, but we know she was happy to meet her Lord. Funeral services will be held at 2:00 p.m. on Tuesday, July 20, 2021 in the Cantlon-Otterness & Viets Funeral Home with Bro. Dusty Armstrong officiating. Escorts will be Kevin Dill, Jacob Lemos, Brian Gann, Seth McGehee, Andy Triplett, Jeremy Weeks, Stacey Weeks, and Richard Patton. Interment will be in the Bethel Cemetery under the care and direction of the Cantlon-Otterness & Viets Funeral Home of Buffalo. In lieu of flowers, the family requests donations be made to the Bethel Cemetery Fund. To send flowers or a memorial gift to the family of Sarah Ann Dill please visit our Sympathy Store.

Sarah Ann (Peterson) Dill was born on December 19, 1954 to Francis and Wanda (Massie) Peterson in Lebanon, Missouri, and went to be with the Lord on July 14, 2021. As a child she lived in Twin Falls, Idaho on a ranch, where some of her greatest... View Obituary & Service Information

The family of Sarah Dill (Buffalo) created this Life Tributes page to make it easy to share your memories.