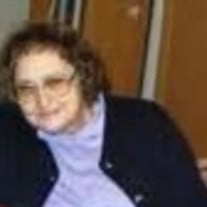 Sharon May Crider, daughter of Lewis and Edith Short Hart, was born April 12, 1944, in Portland, Oregon. She departed this life Saturday, February 19, 2022, in Meadowlark Retirement Center, in Manhattan, Kansas, at the age of seventy-seven years, ten months, and six days. On January 3, 1964, she was united in marriage to Harold Joseph Crider, and to this union one daughter and two sons were born. She was preceded in death by her parents; her husband of forty-two years, Harold, on September 4, 2006; two brothers, James and Charles Hart; and a sister, Jennie Lein. Sharon is survived by a daughter, Lori Crider, of Junction City, Kansas; two sons, Alan Crider, and his wife, Melissa, of Janesville, Wisconsin, and Harold Crider, Jr., of Jackson Springs, North Carolina; ten grandchildren; ten great-grandchildren; a sister, Edna Buroker, of Reedsburg, Wisconsin; a number of nieces and nephews; as well as a host of other relatives and friends. She was raised in Wisconsin, where she attended and graduated from La Farge, Wisconsin Schools. After she and Harold were married, they made their home in various locations while Harold served in the military. Through the years, they called Wisconsin their home and Sharon was a devoted homemaker to her husband and family. Sharon followed the Pentecostal Baptist faith throughout her life. While living in Wisconsin, she was a volunteer with the Meals-on-Wheels program. In her spare time she loved cooking, and made cookbooks of her recipes. She also did crocheting. Her life rotated around her family and she especially enjoyed having time with her grandchildren and great-grandchildren. Sharon was a loving mother, grandmother, great-grandmother, sister, aunt, and was a caring friend. We celebrate her life and know that her family and friends will cherish the wonderful memories she created for them during her lifetime. Funeral services for Sharon Crider will be held Thursday, Feb. 24 at 2 p.m. at Holman-Howe Funeral Home of Lebanon. Visitation will be held from 1- 2 p.m. at the funeral home. Burial will be in Mount Rose Memorial Park. Arrangements are under the direction of Holman Howe Funeral Home in Lebanon, MO.

Sharon May Crider, daughter of Lewis and Edith Short Hart, was born April 12, 1944, in Portland, Oregon. She departed this life Saturday, February 19, 2022, in Meadowlark Retirement Center, in Manhattan, Kansas, at the age of seventy-seven... View Obituary & Service Information

The family of Sharon M. Crider (Lebanon) created this Life Tributes page to make it easy to share your memories.

Sharon May Crider, daughter of Lewis and Edith Short Hart, was...