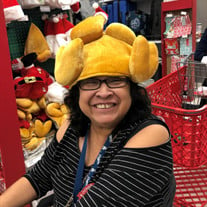 Sharon Michelle Davis, daughter of Alice Atencio and Memo Mata, was born April 14, 1961 in Los Angeles, California. She departed this life Sunday, August 8, 2021, in Mercy Hospital, in Lebanon, Missouri, at the age of sixty years, three months, and twenty-six days. On October 16, 2011, she was united in marriage to Royce Scholle, Jr. who preceded her in death on February 19, 2018. She was also preceded in death by her parents. Sharon is survived by a daughter, Monica Irizarry, of Tavares, Florida; four grandchildren, Briana, Daija, Des, and Jonathan Irizarry; a sister, Gloria Hunt, of the State of California; an uncle, Arthur Sanchez; a cousin, Denice Garcia; as well as other relatives and friends. She was born and raised in California, and later moved to Lebanon, Missouri and made her home. She had worked as an accountant for an insurance company for several years. She was very resilient and when life gave her lemons, she made lemonade. Sharon loved Jesus with all her heart and was a very loving and caring person and a true servant of God. Her faith in God and love for her religion not only touched the hearts of others, but made an everlasting impact on those who crossed her path. She is now together again with her husband, Royce, with whom she spent twenty plus years, in their final resting place, Heaven. Sharon was a loving mother, grandmother, sister, niece, cousin, and was a caring friend. We celebrate her life and know that she will be fondly remembered and greatly missed by all those who knew and loved her. All services for Sharon Davis will be private under the care and direction of the Holman Howe Funeral Home in Lebanon, MO

The family of Sharon M. Davis (Lebanon) created this Life Tributes page to make it easy to share your memories.