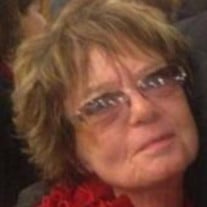 Sharon Kay Hagedorn, daughter of the late Rodger “Jack” & Dixie (Gordon) Nugen, was born on April 2, 1946. She departed this life on March 9, 2022, at the age of seventy-five years, eleven months and seven days. She was preceded in passing by her parents; husband, Dan Hagedorn; son, John Hagedorn; sister, Phyllis Hopkins; and aunt, Alberta “Sissy” Holt. She is survived by her children, Wendy and husband Jason Buschjost of Jefferson City, Missouri, Julie Suzanne and husband Rodney Brownell of Camdenton, Missouri and Luke Hagedorn of Osage Beach, Missouri; grandchildren, Griffin Buschjost of Rolla, Missouri, Jacie Buschjost of Jefferson City, Missouri, Dr. Anthony Brownell of Oakland, California, Henry and wife Bai Brownell of Jefferson City, Missouri, Avery Brownell of Kirksville, Missouri and Harrison Brownell of Osage Beach, Missouri; and sister, Norma and husband Bill Kolwes of Missouri City, Texas. She also leaves behind a host of many friends and other family members who will truly miss her. Sharon was raised in Marshall, Missouri and later graduated from Marshall High School, where she was a member of the cheerleading and volleyball teams. After her high school graduation, she attended Missouri Valley where she not only graduated with a Bachelor’s Degree in education, she was also the Homecoming Queen. Following her graduation from Missouri Valley, she accepted a teaching position at Slater High School. While teaching in Slater, she fell in love with Dan Hagedorn and they were later united in marriage on December 27, 1969. Together they moved to Alabama while Dan was serving in the United States Army and later moved to Camdenton where they made their home. Sharon then accepted a teaching position at Camdenton High School, where she taught Health for fourteen years until her retirement in 2007. In her spare time, she enjoyed bowling, going to bridge club, attending auctions, buying and selling antiques, playing Words with Friends, listening to talk radio, spending time with family and friends, and attending her children’s and grandchildren’s activities. She was a member of Beta Sigma Pi, and volunteered at Raising Hope Free Store. Sharon made a profession of faith and was a member of St. Anthony Catholic Church and Ladies Sodality. She was a beloved Wife, Mother and Baba. We celebrate her life and her accomplishments and will treasure the memories she created for her family and friends. The family invites you to a Celebration of Life Open House at the Hagedorn residence in Camdenton, from 3:00 - 7:00 p.m. on Sunday, March 13. Mass of Christian Burial will be held at 3:00 p.m., Monday, March 14, 2022 in St. Anthony Catholic Church. Burial will follow in Dale Blair Memorial Cemetery, Camdenton. Visitation will take place prior to the mass from 1:00-3:00 p.m., in St. Anthony Catholic Church. Memorial donations may be made to Raising Hope Free Store or Dan Hagedorn Memorial Scholarship and left at the church the day of the service. Online condolences may be made at www.alleeholmanhowe.com. Arrangements are under the direction of Allee-Holman-Howe Funeral Home of Camdenton. To send flowers to the family or plant a tree in memory of Sharon, please visit our floral store.

The family of Sharon Hagedorn (Camdenton) created this Life Tributes page to make it easy to share your memories.