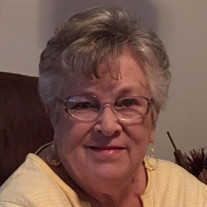 Sharon Margaret Ritchel, daughter of James R. and Christina D. Comstock Conyers, was born April 22, 1943, in Independence, Missouri. She departed this life Friday, July 2, 2021, in her home, in Lebanon, Missouri, at the age of seventy-eight... View Obituary & Service Information

The family of Sharon M. Ritchel (Lebanon) created this Life Tributes page to make it easy to share your memories.