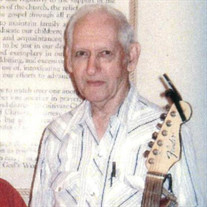 Sherman Gordon Mizer, son of Oscar and Cordie Test Mizer, was born May 31, 1935, near Lebanon, Missouri. He departed this life Monday, June 6, 2022, in Mercy Hospital, in Springfield, Missouri, at the age of eighty-seven years, and five days. He was preceded in death by his parents; his two wives, Lucille and Venetia; three brothers, Don, Charles, and Tim Mizer; and four sisters, Virginia Wells, Lorraine Wilson, Sammie Lloyd, and Patsy Rohwer. Sherman is survived by a son, Jim Mizer, of Lebanon, Missouri; a number of nieces and nephews; as well as a host of other relatives and friends. He was born and raised in the Lebanon area. Through the years, he had made his home in Kansas City, Stover, and Eldon, Missouri, and then retired back to Lebanon. He had worked as a custodian at Lebanon High School and Joel E. Barber School for several years. Sherman followed the Pentecostal faith and attended and preached at various churches through the years. He was a talented musician and had won a guitar playing contest. He loved to sing anywhere he could and had appeared on television once. He especially appreciated Bill Monroe. He had written several songs and was well known in the music circles. He loved his family and especially his son. Sherman was a loving father, uncle, and was a caring friend. We celebrate his life and know that he will be fondly remembered and greatly missed by all those who knew and loved him. A memorial has been established to the family and donations may be made at the funeral home.

Sherman Gordon Mizer, son of Oscar and Cordie Test Mizer, was born May 31, 1935, near Lebanon, Missouri. He departed this life Monday, June 6, 2022, in Mercy Hospital, in Springfield, Missouri, at the age of eighty-seven years, and... View Obituary & Service Information

The family of Sherman G. Mizer (Lebanon) created this Life Tributes page to make it easy to share your memories.