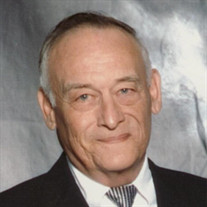 Stanley Hilton “Bud” Allen, son of Stanley and Norma Hilton Allen, was born August 27, 1938, in Lebanon, Missouri. He departed this life Saturday, April 2, 2022, in his home, in Lebanon, Missouri, at the age of eighty-three years, seven months, and six days. On July 7, 1962, he was united in marriage to Sammy Brinneman and to this union two sons were born. His parents preceded him in death. “Bud”, as he was called by his family and friends, is survived by his loving wife of fifty-nine years, Sammy, of the home; two sons, Chris Allen, and his wife, Melody, and Jeff Allen, all of Lebanon, Missouri; three grandsons, Clint Allen, and his wife, Ashley, of Ozark, Missouri, Stuart Allen, and his wife, Jamye, of Auburn, Alabama, and Josh Allen, of Lebanon, Missouri; two great-grandchildren, Caleb and Natalie; two brothers, Sam Allen, and his wife, Susan, and Jim Allen, and his wife, Stephanie, all of Lebanon, Missouri; a number of nieces and nephews; as well as a host of other relatives and friends. He was born and raised in the Lebanon area and graduated from Lebanon High School in the Class of 1957. He then attended classes at Missouri State University for three years and served his country faithfully in the United States Army National Guard for four years. He worked in management with Independent Stave Company for Jim Boswell for a time, owned two variety stores, and had been a longtime beef farmer. Bud had made his profession of faith in Christ at a young age and was a longtime member of First Baptist Church in Lebanon. He was a member of the Lebanon Rotary Club, the Lebanon Park Board, the Lebanon City Council and was elected Mayor of Lebanon three terms. Bud had great love and respect for Lebanon as evidenced by his service with the Red Cross, the Community Blood Center of the Ozarks, the Literacy Council, the Lebanon/Laclede County Library, and the Chamber of Commerce Ambassadors. He enjoyed being outdoors where his favorite activities were hunting, fishing, and farming. He also had a fondness for cats. He loved his family dearly and greatly enjoyed having time with his grandchildren and great-grandchildren. Bud was a loving husband, father, grandfather, great-grandfather, brother, uncle and was a caring friend. We celebrate his life and know that he will be fondly remembered as a devoted family man, a man of faith, a dedicated supporter of the City of Lebanon, a committed community leader and a caring friend to many. Services will be private and a guestbook may signed at Holman-Howe Funeral Home Lebanon where a memorial has been established for Claws and Paws.

The family of Stanley H. "Bud" Allen (Lebanon) created this Life Tributes page to make it easy to share your memories.