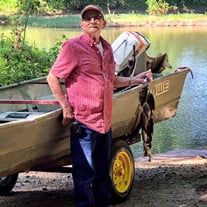 Stanley Junior Handley, son of Junior Leland and Mildred Ruth Blankenship Handley, was born April 24, 1954, in Lynchburg, Missouri. He departed this life Thursday, March 3, 2022, in his home, near Falcon, Missouri, at the age of sixty-seven years, ten months, and nine days. On November 16, 1974, he was united in marriage to Janet Ruth Barnett, and to this union one son was born. His parents preceded him in death. Stanley is survived by his loving wife, of forty-seven years, Janet, of the home; a son, Douglas Lee Handley, of St. Joseph, Missouri; two granddaughters, Kaylee Dawn Clark, and her husband, Ridge, of Hamilton, Missouri, Korbie Ryan Handley, of St. Joseph, Missouri; three great-granddaughters, Sawyer Grace, Kelsie Clark, and Tegan Clark; two sisters, Dorislee McClure, of Falcon, Missouri, and Rosalee Baker, of Rolla, Missouri; several nieces and nephews; as well as a host of other relatives and friends. He lived his entire life in the Lynchburg, Missouri area, and attended Plato Schools. After he and Janet were married they made their home near Lynchburg, and lovingly raised their son. He began working for Osmose Wood Processing Company for several years, and then worked for Farmland Grain Elevator Company for a number of years. Later, he worked for Walmart. Stanley had made his profession of faith in Christ and was a member of Pine Creek Baptist Church. He enjoyed being outdoors where his favorite activities were hunting and fishing with his son. He showed Fox Trotter Horses for a number of years. He liked running the Gator with the family. He was an all around good guy and especially liked children. His greatest joy in life was having time with his family. Stanley was a loving husband, father, grandfather, great-grandfather, brother, uncle, and was a caring friend. We celebrate his life and know that his family and friends will treasure the wonderful memories he made for them during his lifetime. A memorial to Pine Creek Baptist has been established.

Stanley Junior Handley, son of Junior Leland and Mildred Ruth Blankenship Handley, was born April 24, 1954, in Lynchburg, Missouri. He departed this life Thursday, March 3, 2022, in his home, near Falcon, Missouri, at the age of sixty-seven... View Obituary & Service Information

The family of Stanley Handley (Lebanon) created this Life Tributes page to make it easy to share your memories.