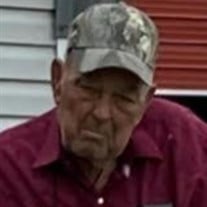 Talmadge Gilmer “Pete” Boren, of Lebanon, Missouri, left earth September 3, 2021 at a rehabilitation center in Columbia, Missouri, at the age of eighty-seven years, six months, and twenty-two days, and entered Heaven. Pete was born the second of ten children to Henry Talmadge and Christine Toy Muse Boren, on February 12, 1934, in Holly Spring, Mississippi. He was preceded in death by his parents; a grandson, Joshua Boren; two brothers, Louis Boren and James Boren; and two sisters, Betty Burrow and Dorothy Boren. Pete is survived by three brothers, Henry “Hen” Boren, of Lebanon, Missouri, Leslie Boren, of the home, and William Boren, of Eldridge, Missouri; and two sisters, Audrey Conway, of Lebanon, Missouri, and Laura Boyles, and her husband, Rick, of Casa Grande, Arizona; two sons, Steve Boren, and his wife, Kathy, of Foley, Alabama, and Vince Boren, of Oceanside, California; four grandchildren, Jason Boren, of Carlotta, California, Amanda Berry, and her husband, Jerry, of Oceanside, California, Cody Boren, and his wife, Stephanie, of Green Forest, Arkansas, and Brock Boren, of Little Rock, Arkansas; five great-grandchildren, Gene, Vince, and Raymond Berry, of Oceanside, California, and Olivia and Cyrus Boren, of Green Forest, Arkansas; a number of nieces and nephews; as well as a host of other relatives and friends. As a child Pete grew up in Arkansas. On June 18, 1952, at the age of eighteen, he joined the service and spent four years on the USS Rogers (DER-876) Ship until his discharge on June 11, 1956. While serving in the United States Navy, Pete received a Korean Service Medal, China Service Medal, and was part of the Korean Presidential Unit. When he completed his four years in the Navy, Pete lived in San Bernardino, California and worked for Santa Fe Railroad. He then worked for the City of San Bernardino before moving with his family to Lebanon, Missouri in the late 1970’s. While living in Lebanon, he was employed at the Independent Stave Mill, Empire Gas, and then later at Lowe Boats when he retired. Pete’s hobbies would be hunting and fishing. In the springtime you would find him planting a large garden to share with family and friends. Pete loved sharing. He also liked caring for his animals, which all had their own names, cows, chickens, and goats. If the dog was lying near him, it was getting a head rub. Pete liked family gatherings. His favorite thing to do was to pick on and tease people. If this was happening to you, you knew he liked you. Services with full military honors for Pete Boren will be Wednesday, Sept. 15 at 1 p.m. at Missouri Veterans Cemetery in Waynesville, Missouri. A memorial has been established to the Lebanon VFW Chapter and donations may be left at the funeral home.

The family of Talmadge G. "Pete" Boren (Lebanon) created this Life Tributes page to make it easy to share your memories.