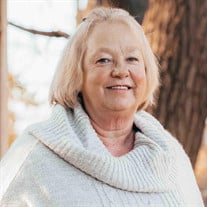 Teresa Jo “Scanner” Broyles Jones, daughter of Jerry and Betty Janes Broyles, was born October 19, 1960, in Lebanon, Missouri. She departed this life Thursday, December 23, 2021, in her home, in Lebanon, Missouri, at the age of sixty-one years, two months, and four days. In 1977, she was united in marriage to Jackie Williams, and to this union one son, Joe, was born. On February 1, 1992, she married Carroll Gene E. Jones and they shared twenty-five years of happiness and memories before his passing on May 12, 2017. Her parents also preceded her in death. Teresa is survived by a son, Joe Williams, and his wife, Joni, of Lebanon, Missouri; four grandchildren, Jaylie, Jayden, Jett, and Jude Williams, all of Lebanon, Missouri; her grandmother, Effie Henson, of Lebanon, Missouri; a sister, Missy Broyles, and her fiancé, Dave Wallace, of Licking, Missouri; three nephews and nieces, Michael Paul II, Jessica Huff, and her husband, Gary, and Jacob Paul, and his wife Samantha; a half-brother, Jerry L. Broyles II, of Lebanon, Missouri; a step-brother, Jimmy Duncan, of Lebanon, Missouri; as well as a host of other relatives and friends. She was born and raised in Lebanon and graduated from Lebanon High School in the Class of 1978. She worked at McDonalds Restaurant for over twenty years and also combined working at H. D. Lee and Casey’s, where she was known for handling difficult customers. She also volunteered with the Ronald McDonald House. She greatly enjoyed her work at McDonalds. Teresa had been saved and attended Faith Pentecostal Church. She had a deep abiding faith in God. She was taking good care of her grandmother, and enjoyed her puppies. Her nickname was “Scanner” because she enjoyed listening to the police and 911 scanners all the time. She loved her family dearly and especially enjoyed having time with her grandchildren. Teresa was a loving mother, grandmother, granddaughter, sister, aunt, and was a caring friend. We celebrate her life and know that her family and friends will cherish the wonderful memories she created for them during her lifetime. Services for Teresa will be Tuesday, Dec. 28, 2021 at the Holman-Howe Funeral Home at 2:00 p.m. Burial will be in Mount Rose Memorial Park. Visitation will be held Monday evening, Dec. 27 from 5 - 7 p.m.in the funeral home. A memorial has been established to the Ronald McDonald House and contributions may be made through he funeral home.

The family of Teresa "Scanner" Broyles Jones (Lebanon) created this Life Tributes page to make it easy to share your memories.